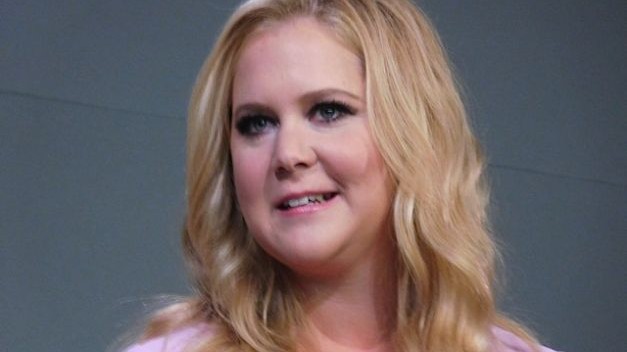 Amy Schumer turned up at the Apple Store in SoHo the other day for a Q&A to promote her film “Trainwreck,” directed by Judd Apatow. Schumer plays a committment-phobe Manhattan career woman who as a young girl was taught by her father (Colin Quinn) that “monogamy is bad,” so she movies quickly from one guy to the next. It was standing room only and Schumer, who is 34, talked about her onscreen character, and pointed out similarities and differences between them.

The talk gets a little raunchy, so be prepared.

Schumer, whose material often comes from a lot of real-life experiences, was asked about her best maneuver for getting out of a bad date:

“Okay, well, like this wasn’t a date,” she said, “but one time I was with this guy, who was uncircumcised…Like no offense, you guys, but I never dealt with that before. He did not give me a heads up, so – no pun intended – so I just like saw it and it wasn’t well kept. I told him, ‘And by the way, you know what? I really, I just realized I’m not over my ex-boyfriend.’ Like I just made up an excuse.”

She added, “I talked about it on stage at some point. Yeah, I hope he didn’t see it. He was French, so maybe he didn’t see it. I guess they don’t do that here, but I’m a Long Island Jew. Everybody’s had a bris where I’m from. Thank God!”

Where did she find the courage to be so damn funny, a young woman asked?

“Just ignorance. I don’t know, I think something’s wrong with me. I’ve always been an asshole…Thank you for your question.”

What differentiates a successful actor from one who is less successful, someone asked?

“I think the non-working actor is still playing with hope. They’ll be happy once they get work and their parents will be proud of them. Whereas, the working actor is a little less happy because their hope is gone.”

Schumer was asked about writing a character who had a lot sex and was not judged for it. But she noticed a child listening to what was about to be extremely inappropriate humor: “There’s a kid here. Do you want like maybe to wear earmuffs? I’m just recommending that to you. I don’t know where your parents are…”

“With my stand up I’ll talk about sex a lot. It’s just because it’s funny, not because I’m having so much of it. I’ve mainly been in long relationships… No one’s ever come on my face. I’m just saying those things. I like broaching those subjects. People are just like, ‘Oh she’s the sex girl. She’s a whore.’ I just want to talk about it, so I think I’m really proud of what we were able to do with this movie because I think you learn a lot about someone rather than just this snap judgment. You’re like, ‘Oh, this where she’s coming from and this is what’s going on with her,’ so I hope people leave it a little less ready to judge a woman who’s sexually active outside of wedlock, or in order to conceive a child.”

From having self esteem issues, how did she turn into a bad-ass confident chick she is now a young woman asked:

“It’s a mixture of not caring anymore, you know, it’s just you just really realize that everyone hates themselves, everyone worthwhile hates themselves and understanding that we’re all having a tough time and that there’s ups and downs and I think. I also think, (back in) 2007 when I was doing Last Comic Standing and Facebook just became a thing, people were really chiming in on whether or not they would have sex with me. and it was around then. Some people you’ll totally you’re going to be their thing, you’re a fucking goddess, and then other people think you’re totally vile and said, ‘I can’t believe anyone’s ever been inside you.’ They’re both right…And sometimes it didn’t matter. It feels so good to fucking be yourself and to throw people out of your life that don’t let you be yourself.”

“Thank you. That was my publicist.”

“And also realizing that the guy for me, like the guy who wants to be with a perfect girl, is not a possibility… So it’s like, this is how it’s going to be. I don’t want to be hungry. I ate several scones today and the right person will think that’s really great.”