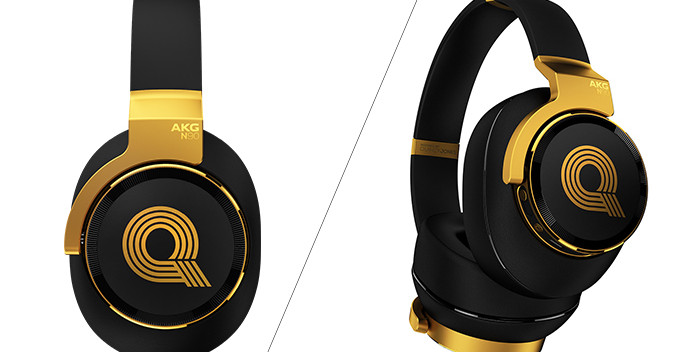 Quincy Jones is one of my heroes. At 82, he’s done everything and worked with everyone. He produced Michael Jackson’s “Thriller” and “Off the Wall” albums. He produced Frank Sinatra, and Ray Charles (whom he met when they were 14 and 16 respectively). He gave us “Strawberry Letter 23.” And “We Are the World.” And the theme music for “Austin Powers.” He was also married to both Nastassja Kinski and Peggy Lipton. I think he has 27 Grammy Awards– the record–  including Album of the Year (1990) “Back on the Block.” Wait– he also has the Jean Hersholt Humanitarian Award Special Oscar.

No. On Friday, “Q” introduced a limited edition line of headphones at the AKG Harman Store on Madison Avenue and 54th St. They are called “N90Q.” They come in black and gold, with a “Q” emblazoned on the outside of each ear cup. They are made of high grade soft leather and memory foam, not to mention some highly technical electronics. The ‘phones are packaged in a gold and black box of some distinct weight, which also functions as a power charger.

The headphones will retail for $1,499.99 when they go on sale in September. Pre-sales start next week.

And yes, they are amazing.

I own a couple of pairs of headphones– Grado, a Brooklyn company, makes light and airy , well reviewed ones under $100. Sennheiser has a nice pair of what they call Urbanites for $200. Sony has solid MDR-1s. Higher end? Sure, over at the Harman store they actually had a pair of Sennheisers and a pair made by Beyer Dynamic in that $1400 price range. That’s how cocky they are about the Quincy’s. They were right there for the side by side testing.

Quincy and Harman/AKG have been working on the N90Qs for five years. Quincy has his name on other AKG headphones but that’s mostly a licensing deal. This, they say, is the real thing. There’s a special calibration button, an EQ system that’s adjustable, bass and treble controls. Put them on. It’s like wearing the best sound system you’ve ever heard, on your head.

Beats, shmeats. When the N90Qs hit the market come Labor Day, no self respecting studio producer or home music expert will want to be seen without these guys. AKG is so proud of these damn things they brought the three people who made them from Germany just for the event. Quincy brought savant star jazz pianist Alfredo Rodriguez, who put on a brilliant one man show in the AKG store with his Yamaha baby grand.

And he spoke. Basically, Q said, “We’re not playin’.” He reminisced about Ray Charles, and a little about Michael Jackson. He shook everyone’s hand. He introduced another beautiful and gorgeous just college graduated daughter, Kenya, whose mother is Nastassja Kinski. (Another of his six daughters is star actress-director-writer Rashida Jones.)

He was dressed in kind cobalt blue Japanese silk and comfy looking slippers. He says, “Man,” when he starts to remember a story, the coolest cat way. Purring. “Man…We came from a jazz thing, a bebop thing. We don’t want to be number 2. These people [AKG] do not play. It’s just been one incredible journey. We were at the CES, and we were number one on their poll. It’s the best sound out there. I can’t even drive a car, but I know this sound. Music is the strangest thing. You can’t see it, feel it, or taste it. I wanted to be a gangster until I was 11. I’d have been in prison or dead if I’d gone the other way. But the west coast turned me around, when I found music.” He added, beaming: “When we found this sound, we yelled I got it! I got it!”

He got it. Let’s hope Amazon does a little discounting in the fall. Also, the beautiful package could use slightly better explained and printed materials. (I had to use a magnifying glass to read them.) The good news (it’s all good news) is that the N90Q’s charge fast either from your computer or an included battery. The charge lasts 12 hours. The ‘phones are reasonably light and feel good on the head. The memory foam on the ears is very comfortable.

But it’s the sound. Man. The main engineer who ran the project for AKG immediately made some changes to my iPod so that volume was unimpeded and Apple’s EQ was off. From now on, it was EQ from the headphones. Press down on a tiny calibration button for 5 seconds and microphones in each ear calculate the most pleasing sound. (You can manually adjust from there.) That’s it.

I listened to Dave Brubeck and Paul Desmond’s “Take Five,” “Aja” by Steely Dan, and Smetana’s “My Country” with the Prague National Symphony. There are three choices: standard, studio, and surround sound. Each one is a revelation. Wayne Shorter’s horn on “Aja” was three dimensional. With Smetana it felt like I was back in the Prague Symphony Hall. Dreamy. “Take Five” took flight and danced around the room.

More to come, in the fall. PS The engineers don’t bother with Tidal or anything else. They get their hi-def tracks from www.hdtracks.com. The N90Q’s love “lossless” music at high bit rates. I’m spending next weekend on that site building a little library.