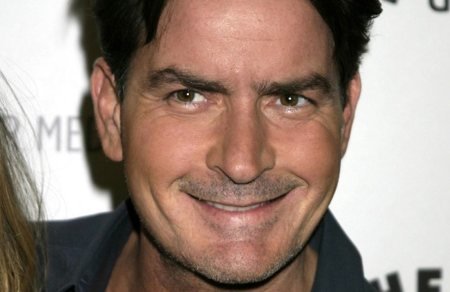 Charlie Sheen is just starting to promote his vanity movie, “A Glimpse Inside the Mind of Charles Swan III.” Roman Coppola directed what he was given, and he did a good job including a couple of nods to his dad’s famous movies (Francis Ford Coppola). This past year Roman co-wrote “Moonrise Kingdom.” He clearly knows what he’s doing.

But Charlie Sheen is in charge here, it’s his movie, and it’s tripe. It’s the perfect sort of circa 1974 trippy movie that maybe Bob Rafelson would get, but surely no one else. The film is just a huge masturbatory project for Sheen, who is no less obnoxious or self involved than he was two years ago when his breakdown or whatever it was began.

This is really a vanity project, too, full of Sheen’s and Coppola’s friends and family. Jason Schwartzman– also Coppola’s cousin– is well placed as Swan’s best friend. Patricia Arquette is nicely cast as Swan’s sister. But Sheen as Swan is just miserable and insufferable. Charles Swan is the rich, belligerent star of a movie in his own head. He lives in Hollywood, has a graphic design firm, and basically behaves like someone’s idea of Hunter S. Thompson. There’s no real plot of any interest except that Swan is a rich eccentric who crashes his odd automobile, winds up in the hospital, and hallucinates fantasies. They’re inter-cut with his pursuit of a beautiful girl (Katheryn Winnick.)

I was lucky, I had a DVD I could fast forward. But even so I ran into cameos from Dermot Mulroney, Colleen Camp, and several others. Bill Murray has a bewildering role as some kind of mentor to Swan. I guess Swan is supposed to be a stand in for Sheen when he was in his collapse period. But really–who cares? The guy is a lout. And there’s nothing remotely charming about watching Sheen and his pals carry on in the Hollywood Hills. It’s like he’s never seen David Rabe’s play “Hurlyburly.” But we have. And that’s enough.

A24, a new little film company, is releasing “Charles Swan.” I don’t get it. There are so many more interesting and important films to put out than this. Maybe all the people who didn’t feel ripped off by Sheen’s live tour will buy this DVD or download it. I can’t image sitting in a theater for it. If you want to see violence, just wait til someone pays $8 for ticket, 10 bucks for snacks, and 30 bucks for a babysitter, then sits down to “Charles Swan.”

The movie has truly awful music by someone named Liam Hayes, and a very egotistical self-referential ending in which the actors all introduce themselves. They should have used pseudonyms.