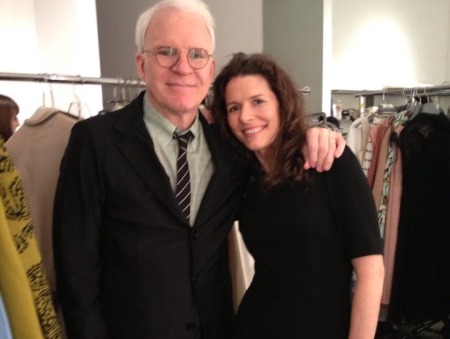 I told you last June that Steve Martin and Edie Brickell were recording an album together. http://www.showbiz411.com/2012/06/25/the-new-steve-martin-and-edie-brickell-aka-mrs-paul-simon-team-up Now it’s ready.

Produced by the great Peter Asher, the man who made the bulk of Linda Ronstadt and James Taylor’s key albums successes in the 1970s, “Love Has Come for You” will be released in April, and lead to a tour. Brickell, if somehow you don’t know it, is also Mrs. Paul Simon. She had a big hit circa 1988 with “What I Am.” But then she decided to get married and have children. She and Simon have three, and at least two of them are said to be burgeoning musicians.

Brickell made a terrific but little known album with Simon’s older son, Harper, a few years ago, called “The Heavy Circles.” All of her songs can be streamed over at www.ediebrickell.com

Photo here is from Steve Martin’s Twitter feed– he says, from the day of their album cover shoot. “Love Has Come For You” will be on Rounder Records/Universal Music Group.