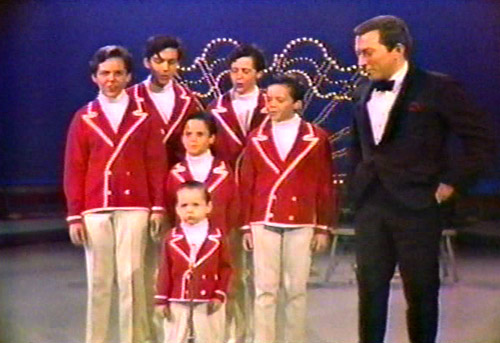 Andy Williams has died. The clean cut, handsome entertainer was best known for his hit version of “Moon River,” for hosting a variety show, and for being the calm alternative in the late 60s and early 70s to the culture that changed around him. He launched the Osmond Brothers, Donny and Marie, and all of that. Williams was also married to beautiful Claudine Longet, who was the center of a scandal when she was accused of fatally shooting her lover, a skiing pro named Spider Sabich, in 1976.

But Williams should be remembered primarily as a singer, and the last of the crooners who held their own as the Beatles and rock and roll took over the entertainment world. He had a pure sound, kind of the all-American voice. He was also a sweet natured, nice guy who was later associated with Ethel Kennedy after Senator Robert Kennedy was assassinated.

Williams told Larry King in an interview: “We were friends for life, and are very good friends now, yes. I love Bobby and Ethel, and my wife, Claudine, and I were very close with them, and then when he was killed, I was a delegate for the — for Bobby, from the state of California. And I went to Chicago and did that part, and gave my vote to who Bobby really have done it to, George McGovern, and then I never got involved with politics after that, but I loved both of them very much.”

Williams had plenty of middle of the road hits besides “Moon River.” He did specialize in movie themes, taking “Born Free,” and “Love Story,” to the top of the charts, as well as “Happy Heart” and “Dear Heart.” In 2009 the Songwriters Hall of Fame presented Williams with the Towering Song award for “Moon River,” which was written by Henry Mancini.