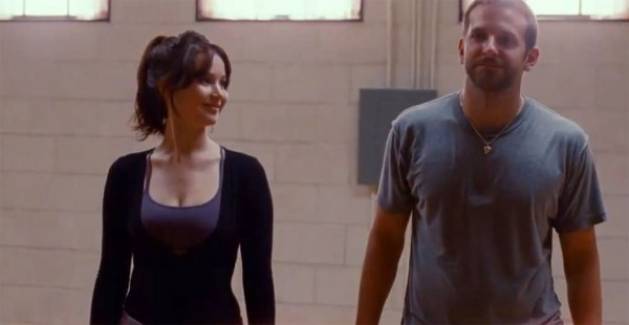 Jennifer Lawrence is just 22 years old. She already has an Oscar nomination for “Winter’s Bone.” She’s also the star of one of the biggest movie franchises in history, “The Hunger Games.” But it’s going to be her work in David O. Russell’s “Silver Linings Playbook” that will earn her another nomination this winter, and very likely a win. Lawrence is a revelation as Tiffany, a young widow with let’s say some socialization problems. At the film’s premiere tonight in Toronto at Roy Thomson Hall, it’s an understatement to say the audience was gobsmacked by her performance.

But then again, everyone and everything about “Silver Linings” is so sensational that it will have a hard time living up to its hype. Equally good are Bradley Cooper in his second epic role here in two days. Cooper’s Patrick is just as well wraught–he’s a guy in crisis after finding his wife, the love of his life, in bed with another guy. He’s spent 8 months in a psychiatric ward, and now returns to try and rebuild his life while staying with his parents–Robert DeNiro and Jacki Weaver.

It’s easy to shortchange Cooper because he’s been in the “Hangover” movies, is good looking and seems to have breezed through his career. But that’s just the surface. Between this movie and “The Place Beyond the Pines,” he’s about to vault into a whole new higher level in the “biz.” Trained at the Actors Studio, Cooper is finally getting to show his range. I said when he was in “Limitless” that he was a movie star. But now he goes beyond that. His Pat is a pleasurably panoply of mental illness. And Cooper has no problem going from the dramatic to the comedic, never milking Pat’s illness. He will also be an awards magnet.

Russell himself rose through the ranks last with “The Fighter.” This is sort of a companion piece to that excellent film, only richer and deeper. One of the best things about it is Robert DeNiro, long criticized for picking movies for paychecks and not quality. I guarantee you DeNiro will have a Best Supporting Actor nomination for his role as Pat Sr. He could also be a shoo in winner. It’s his best work since “Casino.” As a long time DeNiro fan, I can tell you it’s very satisfying to see him at his best.

There will be more to come about this film. But with this, “The Master,” Quentin Tarantino’s “Django Unchained,” the musical “Sapphires” and Dustin Hoffman’s “Quartet,” not to mention “The Intouchables.” TWC and Harvey Weinstein have a surfeit of gold on their hands. It’s pretty wild.

PS Jennifer Lawrence brought her parents, who hail from Louisville. They’re terrifc, but can’t really explain how their daughter–their third child–is a prodigy. And rest assured Jennifer–who we’re just getting to know–is a great girl. If she had a rebellious period, we missed it. She’s solid.