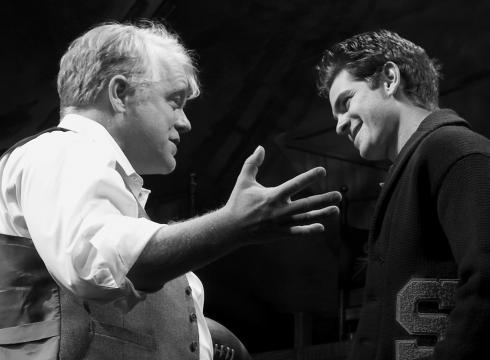 The greatest American play? Quite possibly Arthur Miller’s “Death of a Salesman,” set in 1949 and revived last night on Broadway in a production that is outstanding. Mike Nichols directed and reinvented Miller’s classic, with Philip Seymour Hoffman as Willy Loman, Andrew Garfield (the new movie Spider Man) as Biff, Linda Emonds as Willy’s wife Linda, and Finn Wittrock as Happy. This is a historic production, quite possibly the best ever (and there have been many great ones starring Dustin Hoffman, Brian Dennehy, Lee J. Cobb, George C. Scott). Thursday night’s star studded opening was the second time I’ve seen this production, and it’s only gotten more devastating, deep, emotional, and overwhelming. Philip Seymour Hoffman is our generation’s Jason Robards. He is perfection as Willy Loman in all aspects–from Willy’s wrestling with his past (the father and brother who left him) to his denial about more current events, and his increasing mental in capacities. PSH has an Oscar for “Capote” but this is his Tony Award. He cannot be missed.

The whole cast is spot on. Considering it’s a play about fathers and sons, I was particularly moved by Andrew Garfield’s father’s reaction to seeing his son as the angry ne’er do well, Biff. At the party following the opening night at Bryant Park Grill, Mr. Garfield and Andrew just kept hugging and crying. The cast is extremely worn out emotionally after each performance. Even last night Mike Nichols, who’s sat through every preview to give “notes,” told me he was overwhelmed. Arthur Miller’s famous actress sister, Joan Copeland, t0ld me it was the best production she’d seen since the original. Martin Short told me that Tom Hanks had seen it a few days ago and declared it “the best thing he’s ever seen, period.” Columbia Pictures’ Amy Pascal came to congratulate her upcoming Spider Man.

Scott Rudin produced this extravaganza, and it made for quite a glittering night. In the audience were Nichols and Diane Sawyer, Paul Simon, Barbara Walters (who came with David Geffen), Julianna Margulies, Julianne Moore and Bart Freundlich, Catherine Keener, Amy Ryan, Spike Lee, Anjelica Huston, Meryl Streep and Don Gummer, and Garfield’s actress gf Emma Stone, Julia Roberts, plus “Saturday Night Live” star Bill Hader, who said he almost fainted when Nichols complimented his “SNL” work. It was kind of funny at one point seeing Streep, Gummer, Nichols, Sawyer and Huston all dining together. That’s superstardom. Nichols also welcomed his bff and genius comedy partner Elaine May, who came with husband (or boyfriend–no one is sure) legendary director Stanley Donen and bff Marlo Thomas. Where was Phil Donahue? “Playing golf in Florida.” That seemed ok. More A list guests: Bernadette Peters, Jeffrey Wright, Bobby Cannavale, Carol Kane, Rosie Perez, Anna Deveare Smith.  What a way to kick off the new Broadway Tony season!

Don’t be misled by the New York Times review, which I think is completely off the mark. PSH and Garfield are stunning. Emonds and Witttock are exceptional. All the supporting players are top notch. Nichols has given “Death” a new life, illuminating its intricacies and sophisticated architecture. There isn’t a false note played. Rudin will now have the top grossing musical (“Book of Mormon”) and play on Broadway at the same time.