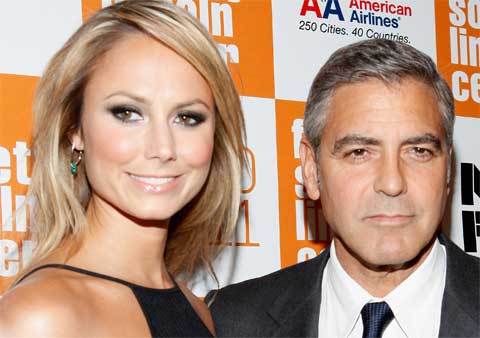 Our Leah Sydney is sending reports from the 15th Annual Hollywood Film Awards dinner in Los Angeles at the Beverly Hilton, where George Clooney has made a splash with girlfriend Stacey Keibler, and “everyone is thanking Harvey Weinstein,” Leah reports that Clooney — now the Hollywood vet– fixed the tie of “The Artist” director Michel Hazanavicius before he got on stage. Jean DuJardin, the movie’s star, joked, “Do I have to talk? It’s a silent movie, my English is  rusty.” It’s the coming out party for DuJardin, Hazanavicius, and Berenice Bejo–they’re meeting and greeting Hollywood establishment.

Starz Channel’s Chris Albrecht and Hollywoodnews.com’s Carlos Abreu have put together the night–with tons of stars. Clooney and Keibler, Glenn Close, Ted Danson and Mary Steenburgen, Paul Haggis, Ewan McGregor, Anne Hathaway–a breath of fresh air, Ben Affleck, Joseph Gordon-Levitt, Emma Stone and the gang from “The Help,” and so on all over the room.

A big hit of the Hollywood Film Festival is “Beginners,” with Christopher Plummer getting a lot of buzz for Best Supporting Actor. McGregor, presenting Plummer with an award: “I wondered if we would gel as father and son, I wondered if he would like my version of ‘The hills are alive.’ But he had me in tears the whole time.” Plummer was erudite and charming – he cracked the audience up when he looked at the video screen and saw himself large and looming over the hall. He said, with a smirk, “God, that is cruel to the face. I don’t look like that do I?”  Plummer continued, about “Beginners”: “I’ve never been so relaxed in front of a camera. Surely that is prize enough.”

There were more awards, including a standing ovation for Glenn Close–is this her year, for “Albert Nobbs”? And Hollywood veteran Don Murray presented to Michelle Williams for her work in “My Week with Marilyn.” Murray said: “I’m the last of the onscreen lovers of Marilyn Monroe.” He joked: “I’m just happy to have a body that works.”  Williams, nervous but sweet, said: “All that Marilyn Monroe ever really wanted was to be taken seriously as an actress. She never got the recognition she craved.”

Meantime, a bearded Ben Affleck  got a lot of laughs before he presented cinematographer Emmanuel Llubezki with an award. He told the crowd that just outside the Hilton a guy came up to him and said “Right this way, Mr. Bruckheimer.”