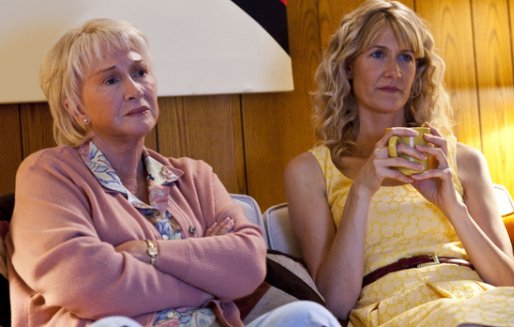 Mother and daughter Oscar nominees Diane Ladd and Laura Dern are working a lot together these days. They co-star in HBO’s new hit show, “Enlightened.” And now they tell our LEAH SYDNEY that their long-awaited film about larger than life Nixon era Watergate character Martha Mitchell is finally coming together. Ladd said: “It’s written, and I’m going to direct it. I co-wrote it with Scott Alsop. We wrote 14 drafts of the script. Martin  Scorcese is the Executive producer and he said it’s one of the ten best scripts he’s ever read in his life.  ‘I’ve been working on this for over 25 years.  I play Martha and Laura will play the younger Martha. A big star is going to play [Nixon attorney general] John Mitchell but I can’t tell you right now. Hopefully we’ll start shooting sometime in 2012.”

Did she and Martha ever meet? Ladd replied: “Not in the body –ok?  Read the book,” she instructed, referring to her now being edited memoir. As for directing, Ladd said she is ready: “I’ve already directed a film which I got great reviews for. I won three best director awards. My country is not a country that adores it’s female directors I’m sorry to say. Spain, France and England are better.  It took 85 years for Kathryn Bigelow to win [an Oscar], and she had to do a war picture to do it. I don’t now what’s going to happen. You can’t worry about the results. You have to concentrate on the being and the doing. That’s what I’m about. “

Laura, whose father is actor Bruce Dern, says she’s just fine working so much with her mother. They’ve done a lot before, including David Lynch‘s “Wild at Heart.”

“The best thing is that she’s an incredible actor, and she’s brave enough to completely detach from any projection she of wants to look like as my Mom. She’s purely in this character who’s a complicated and withdrawn mother. If there is any worse thing it would have been 20 years ago, when I worked with her.  I was so young, that I was more determined to have my independence than to enjoy the ride of working with her. Now that I’m forty I just enjoy the ride, so it’s a double blessing.”