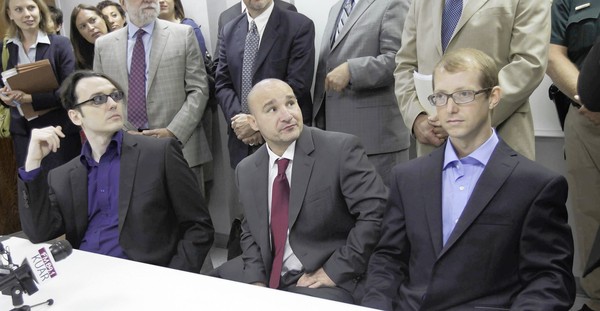 The West Memphis Three got a thunderous and rapturous standing ovation last night at the New York Film Festival premiere of “Paradise Lost 3: Purgatory.” It was quite an evening for them, with celebrities like singer Paul Simon, and actress-activist-producer Trudie Styler there to support them. Earlier in the day, Damien Echols said at HBO’s press conference that his biggest adjustment to life outside prison after 17 years was walking. “I’m used to walking in chains,” he said. “I fell down a lot the first few days.”

Now Echols, who’s left Arkansas for good, heads to New Zealand with his girlfriend for two months. They will be hosted by “Lord of the Rings” director Peter Jackson, who took an interest in the case and helped fund the defense along with rock stars Eddie Vedder, Natalie Maines, and actor Johnny Depp among others.

Jackson’s involvement has been a double edged sword. While his generosity made a lot of the legal wrangling possible, he’s also caused some problems for “Paradise Lost” filmmakers Joe Berlinger and Bruce Sinofsky. Jackson has been funding a documentary by Amy Berg, who came into the West Memphis Three saga after the first two “Paradise Lost” films were made and heaped with awards. Since Berg arrived in Arkansas, sources say, she’s done a lot to undercut the “Paradise Lost,” which will undoubtedly be up for an Oscar. It also premieres on HBO in January.

“Berg did a lot to try and cut Berlinger and Sinofsky off from their original sources and characters,” an HBO insider tells me, by buying up their rights with Jackson’s money. “How would she have felt if they’d tried to make a sequel to her film, ‘Deliver Us From Evil’?”

Indeed, the word now is that Berg has hopes to bring her film to Sundance. But knowing the festival, this doesn’t seem likely. Certainly the Q&A after her film would be loaded with questions about how she muscled in on the “Paradise Lost” territory–simultaneous to the new installment playing on HBO.

Meantime, at the after party at the Hudson Hotel last night, Echols and Jason Baldwin played a little friendly pool, knocking back glasses of water and accepting congrats from everyone. Their co-defendant, Jessie Misskelley, was happy just cooling out with friends and family on the hotel’s terrace.

Berlinger will move ahead now. He filmed Simon’s 25 year “Graceland” reunion in South Africa. Simon–bracing for some Grammy nods for his recent “So Beautiful or So What” album–said he’s very excited about the outcome.