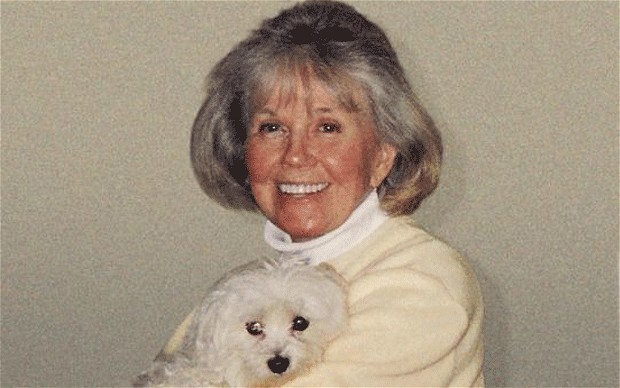 (Crazy rumors today that Doris Day would act again in a Clint Eastwood movie. Hogwash! Anyway, here’s my December 2011 interview with Doris, a high point for me since I waited 20 years for it. On the day I interviewed her, “Que Sera Sera” was placed in the Grammy Hall of Fame. So was “Born to Run.” When I told Doris, she responded: “And who is Bruce Springsteen, dear?” I mean, you have to love her.)

Doris Day is 87 years young, and you could still fall in love with her, even over the phone. Her buttery speaking voice, which kind of purrs as she recalls her halcyon days as a screen star and singing sensation, has not aged, despite her protestations. She laughs a lot in our conversation about her extraordinary career.

Long before Julia Roberts or even Barbra Streisand, the Cincinnati-born Day was the reigning queen of the box office—the No. 1 money-making star for four years in the early to mid 1960s. Nominated for an Oscar for the comedy Pillow Talk (costarring her buddies Rock Hudson and Tony Randall), Day has some knockout dramatic performances on her resume, too: Love Me Or Leave Me (which Martin Scorsese later used as the inspiration for New York New York) and Alfred Hitchcock’s The Man Who Knew Too Much, with Jimmy Stewart. Many of her films were made at Warner Bros., which, unlike MGM, was not known for its musicals.

“At Warner Bros. they had serious films,” Day tells me. “All the dramatic actresses were there. When they hired me, they didn’t know what to do with me. The first thing they put me in was Romance on the High Seas, a little comedy. The next one was My Dream Was Yours—I don’t even know what that was about.”

She did know about singing, and she had hit after hit for two decades.

This month, Day released a new album in the US, already a Top 10 hit in Britain in the fall. My Heart—all the proceeds from which go to the Doris Day Animal Foundation—features 13 tracks, 9 of which were produced in the 1980s by her late son Terry Melcher, famous for his work with the Byrds and the Beach Boys. Two highlights of this sterling collection are “You Are So Beautiful” and the Beach Boys classic “Disney Girls.” On the day I spoke to her, Day’s most famous song, “Que Sera, Sera,” was selected for the Grammy Hall of Fame, where it joins her recordings of “Secret Love” and “Sentimental Journey.” She also has a Grammy Lifetime Achievement Award.

Day was married four times. After her third husband, Marty Melcher (also her manager), died in 1968, she learned she was in financial straits and went ahead with a TV series Melcher had committed her to, which became the top-rated Doris Day Show. After five seasons, she bowed out and went into semi-retirement.

The star has lived for 40 years in Carmel, California, where she’s a well-known animal rights activist and owner of a popular inn. Fear of flying has kept her from going to New York, Los Angeles, or Washington, D.C. to accept the many awards she’s been offered. Her return to the spotlight with My Heart could not be more welcome. Modest to a fault, Day—who continues to receive hundreds of fan letters each week—doesn’t seem to fully appreciate her place in popular culture. But recently a visit from a Beatle provided further evidence of her vast influence.

Paul McCartney interviewed you recently for a British newspaper about My Heart. What was that like?
I think it went well. I was out walking my dogs, and the man who works here came out and said, “It’s Paul McCartney on the phone.” I said, “All right, tell me who it really is.” I thought it was someone playing a game. He said, “Will you please tell her that I want to know her and want to come and see her.” It was Paul, and he did come, with his new wife. We had hours here. It was really nice. And he’s really cute.

One night the phone rang around 2:30 in the morning; I thought something terrible had happened. He said, “Hey, what are you doing?” I said, “Well, I was sleeping.” He would call at all hours just to say hello. He got a big kick out of that.

Your new album, My Heart, was mostly produced by your late son, Terry. Most people don’t know he cowrote “Kokomo” for the Beach Boys.
And they didn’t win [the Grammy] that year. That was a crime. [The song lost in 1989 to Phil Collins’s “Two Hearts.”] That year, that was so terrible. At the table we were really….I thought was an insult. I loved “Kokomo.” It was so popular.

And you covered the band’s song “Disney Girls,” which he produced. How was that?
I loved it. If it’s a good song, I love singing so much. I get so involved.

Do you sing much now?
I can’t now. I could still sing until I got bronchitis. I had a very, very bad attack a couple of years ago; I thought I would never get over it. That’s why I sound different. But sometimes I sing along with something, and I think, “That wasn’t bad.” I wonder sometimes if I could start vocalizing.

I’m interested in your technique as a singer. Your phrasing is so elegant and simple. Did you think about what you were doing?
No. I knew the songs that we were going to do. We would put them together at my house. We would all decide what to do. The words were there, and the words told a story. I can’t say any more than that, except I loved singing.

Was the label always suggesting songs to you?
They used to tell us what to do. The album I did with Andre Previn [1962’s Duet], I picked my own then.

A great favorite is “Perhaps Perhaps Perhaps,” from the Latin for Lovers album.
I loved making that album. At first I thought, “I’m going to do this? Me?” But I fell in love with all the songs. It’s maybe one of my favorites of all time.

Were there songs you weren’t thrilled with?
[long pause] “The Purple Cow.” When they tagged that one on me, that was it. “I never thought I’d ever see a Purple Cow.” Isn’t that terrific? Great idea. Oh lord! I don’t like to fight with people and say I won’t do that! But you also get a lot of good things to do.

What was it like singing with Les Brown and His Band of Renown?
It felt good. And if you liked the song, it was wonderful, because people came right up to the bandstand and it was great fun. They wanted to say hello to you.

Did the band kid around with you a lot?
I had a great time. The guys were so nice to me–they looked after me and helped me, they took all my baggage. They were all like my brothers.

Was it a big change for you when you went solo?
The first time I ever worked alone, I had two shows a night at the Little Club on East 55th St. in New York. I opened it. My mother was with me, and my little baby. It was something so new for me. I thought, “What am I doing?” I was so used to having the guys behind me. But it turned out to be really nice. The people kept coming back! I was surprised! A lot of the women were Vogue types, models, all dressed up like crazy. They would say, “Come on over and have a drink.” But I wasn’t drinking. I would go back to my apartment between shows.

You were not a drinker?
No.

Other singers—Billie Holiday, Judy Garland—had terrible substance problems. How did you avoid it?
Easy—I didn’t do it.

When acts like the Beatles became popular, did you resent it? It’s been widely acknowledged by many singers of your era that rock groups hurt your careers.
Not at all. Weren’t they entitled? I thought when I heard [the Beatles] that they were very good. That never occurred to me. And Paul was the one who got in touch with me!

Tell me about your costars. What was Jimmy Cagney like?
I loved him. He as a wonderful person, just adorable. Not in that film [Love Me or Leave Me], he wasn’t. Oh, he was nasty!
Cary Grant?
“Cary was very nice, but we didn’t sit around and talk. At lunchtime, he would go outside with that thing you put under your chin for the sun [a reflector], because he didn’t want to wear makeup.”
Tony Randall?
He was so superb, so funny. He was always in New York after that. I just loved him. Did we ever [have fun]! We laughed.

Rock Hudson? The two of you had such great chemistry.
We really liked each other. He named me Eunice, just for fun. I was always Eunice with him. I was up here filming a show [Doris Day’s Best Friends, July 1985] when all of a sudden he appeared. At first I didn’t know who he was. I looked at him and was almost in tears. He was so thin, just gaunt. It was just unbelievable. But we walked and laughed together. He was so seriously ill, but he was still funny. It just about put me away—it’s so hard to be funny when you know what’s going to happen.

Jimmy Stewart?
Wonderful. I had a great time with all the gentlemen I worked with. Really.

Looking back, all your costars were men. Was there ever a woman you would have liked to be in a movie with? An actress you thought was funny? Or would you have done something like Thelma and Louise?
No. [pause] Yes, if there was a really great script and a reason. But I always thought the women should be with the men.

You selected the tunes for this album, many of which were produced by your late son, Terry Melcher. But back in the day, you didn’t get to pick, did you?
“They used to tell us what to do. If it was a bad song and I had to do it, I just did the best I could. I sang because I loved to sing.”

“Que Sera, Sera” is now in the Grammy Hall of Fame.
“At first I thought it was kind of a silly song for that film [Hitchcock’s The Man Who Knew Too Much]. But it was good in the movie, and people sang it to their children.”