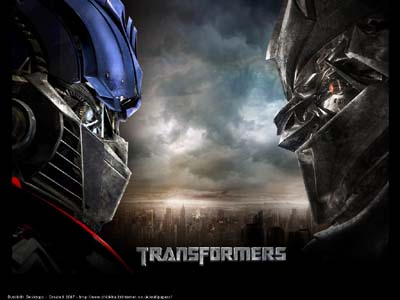 The new “Transformers” didn’t do well on Wednesday. It’s the sixth biggest opening day in history. But it made $37 million, far behind its predecessors on their respective opening days. Still I see that all the trade papers took the bait and pronounced it “the biggest opening day of 2011.” Uh, that’s not saying much. It was also the biggest opening day for a film based on a toy this year. And the biggest opening day for a film featuring Frances McDormand and John Turturro. The whole “broken record” thing has become something of a joke at this point. I will say this, however: last night at the AMC Lincoln Square, there were lines of fan boys and girls waiting to see “Transformers.” The lines snaked up and down the stairs. And fanboys are from all walks of life. Standing next to each were a black kid with sunglasses and headphones, and an Orthodox Jewish kid with tzitzit hanging out of his shirt. Maybe “Transformers” is the movie that brings the world together. POW! But it’s just junk food, and not so good at that. Paramount spent a fortune opening it in Russia, and then taking over Times Square. And Shia LaBeouf got the last laugh on everyone. He got Biggest Opening Day for a Young Buck Movie Star Who Kisses and Tells. Ka-ching!

Anyway, this too shall pass. Paramount has just released a new trailer for “Mission Impossible 4: Ghost Protocol.” As with number 3, it does look like J.J. Abrams has a winner on his hands. http://www.youtube.com/watch?v=V0LQnQSrC-g. I love how Tom Wilkinson keeps a straight face. “Your mission, if you choose to accept it.” Indeed.