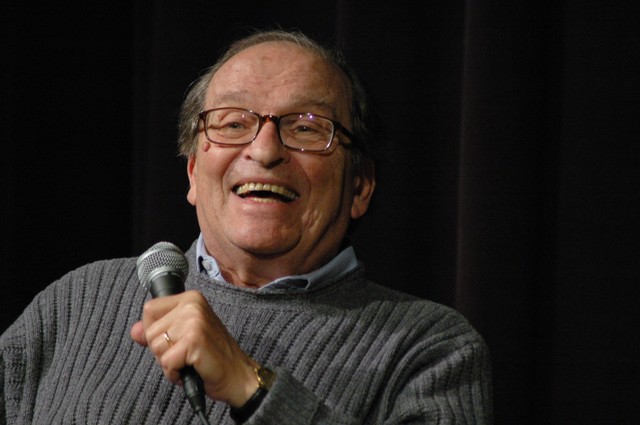 Al Pacino, Glenn Close, and Treat Williams were just some of the stars who turned out on Monday afternoon at Alice Tully Hall to celebrate the life of director Sidney Lumet. The man who made “Serpico,” “Network,” “12 Angry Men,”  “Prince of the City,” and “Before the Devil Knows You’re Dead” died in April at age 86. Quintessentially the New York director, Lumet won a Lifetime Achievemement Oscar a few years ago after many nominations. His memorial, organized by screenwriter daughter Jenny (“Rachel Getting Married”) Lumet and long time assistant Lili Jacobs, was an elegant, moving tribute. I liked that Jenny started the event by remarking that Sidney’s “spirit is hovering over white fish section at Zabar’s”

There were almost as many celebrities in the audience as there were who spoke on stage. In the crowd: Pacino, Alan Alda, Bob Balaban, E.L. Doctorow (whose novel “The Book of Daniel” was made into a great Lumet film), Joan Didion, Vanessa Redgrave, Paula Deviq (from “100 Center Street”), Hannah Pakula, Lee Grant, Alexandra Schlesinger, Treat Williams (star of Lumet’s “Prince of the City”), ICM’s beloved agent Boaty Boatwright, Buck Henry, Bob Dishy, producer Leslie Holleran, Peter Matthiessen and the great Lois Smith, Lumet’s long time friend and publicist, who came all the way down from Plum Island.

Sidney’s ex wives did not attend–Rita Gam, Gail Jones Buckley, or Gloria Vanderbilt–that’s right, Sidney divorced Anderson Cooper‘s mother four years before he was born. But his wife of 30 years, Mary Gimbel, was there and received many lovely citations from the speakers.

Some highlights: Walter Bernstein, the screenwriter who was blacklisted and eventually celebrated in Woody Allen’s “The Front,” talked about how Lumet hired him in the 1950s despite being told not to. “We pioneered product placement. If you mentioned the Charlie the Tuna you got a case of scotch.” They rewrote a whole TV episode just to get new fangled inventions called blenders. “I was blacklisted,” said Bernstein. “He was a mensch, which is better than getting an Oscar.”

Marshall Brickman, who co-wrote “Annie Hall” and more recently, “Jersey Boys,” echoed many of the comments about Lumet’s quick way of shooting a film, always under budget: “He could shoot a 90 minute movie in 43 minutes.”

Chris Walken: “He liked to pull the film through his hands. He said filmmaking was tactile.”

Lauren Bacall, of course, stole the show: “He asked me to be in Murder on the Orient Express [with a lot of stars like Sean Connery, Jackie Bisset, Vanessa Redgrave]. “He said, Everyone’s getting the same amount. Don’t try bargaining.” She added: “To me, he’ll always be Bubbeleh.”

A couple of footnotes: Lumet had a great screenwriting partner in the late Jay (Jacqueline) Presson Allen, who wrote “Prince of the City,” “Just Tell Me What You Want,” and “Deathtrap”with him. They started working together in television.

And Lumet worked with both Matthew Broderick and his father, James Broderick, respectively, directing them in “Family Business” and “Dog Day Afternoon.”

Lumet made two movies with Henry Fonda, and two with Al Pacino. He directed Michael Jackson in “The Wiz”–Michael’s only starring role in a feature.

Lumet gems include “Garbo Talks” with Ron Silver and Anne Bancroft, “The Morning After” with Jane Fonda and Jeff Bridges, and “Network,” with Faye Dunaway, Peter Finch and William Holden–still one of the great classics of all time.

Sidney Lumet–he was such a lovely guy, adored by his friends and family, and missed terribly. The Film Society of Lincoln Center will have a Lumet festival next month. Don’t miss it.