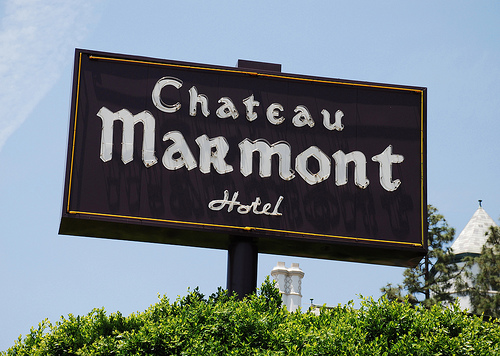 So many things from last night’s swell Creative Coalition Spotlight Award dinner: first and foremost, Griffin Dunne, who was one of the four honorees, is getting ready to a documentary about the legendary Chateau Marmont. Owner Andre Balazs actually sought out Dunne, whose newest film, “Last Night,” is featured at the Tribeca Film Festival.

Of course the Chateau was home for years on and off to Griffin’s late, great dad Dominick Dunne. And the place is in famous for John Belushi‘s 1982 death as well as many other stories of sex, drugs, and rock and roll. The Chateau has lots of private nooks and crannies, and they’re all full of secrets!

The roasting in the dining room atop the HSBC bank on Fifth Avenue was fairly lively, too. In her speech, Danner recalled a twice-aborted flight to Sundance she was on with Dunne. She remembered that he was so eager to get off the plane after its second return to New York that he elbowed her out of the way to make a speedy exit. “I’ve never forgotten that flight,” she laughed. “Neither have I,” said Dunne.

The most prepared and funniest comments of the night came from actor Liev Schreiber, who toasted LaPaglia by observing that he is the “most American actor who isn’t an American.” He said that everyone thinks the native Aussie is from Brooklyn. Schreiber said his only retaliation was to marry another Aussie, Naomi Watts, who was there with him. Their two children are “hybrids, a new race of super actor.” Watts, by the way, is just back from Thailand where she shot “The Impossible,” a grueling film about the Indonesian tsunami with Ewan MacGregor.

Also at Spotlight dinner, sponsored by AM New York, Matthew Modine introduced Blythe Danner, whom he’d really never met before. “She probably doesn’t even know who I am,” he joked.

Don’t worry, Matthew; she did!