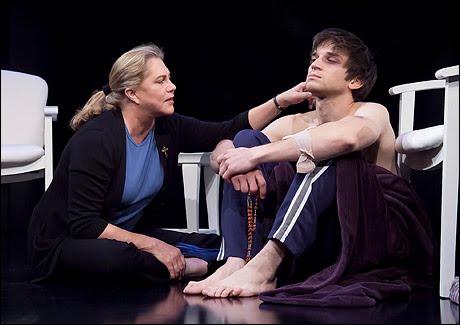 Kathleen Turner has a lot of loyal exes, I’ll say that for her. Last night for the premiere of her new play, called “High,” she packed the house with ’em. Michael Douglas, her co-star in three classic films (“War of the Roses,” the two “Romancing the Stone” movies) was on the aisle, center. Douglas, looking great, by the way, was seated right in front of Bill Irwin, who co-starred with Kathleen on Broadway in “Who’s Afraid of Virginia Woolf?”

Across the aisle from Irwin, Kathleen’s “Serial Mom” director, John Waters. And elsewhere in the theater was Turner’s ex husband, Jay Weiss, with their daughter, Rachel. Apart from the exes, I chatted with Elaine Stritch, Carroll Baker, Tovah Feldshuh, and Alan Cummings.

It was a hot night in the Booth Theater, as Kathleen and her co-stars–Stephen Kunken and Evan Jonigkeit–worked like dogs to make something of a slight, melodramatic play by Michael Lombardo. To their credit, they did it–and Turner–a multiple Oscar and Tony nominee–knows how to work an audience.

The ladies (and maybe a few guys) were happy with Jonigkeit‘s Broadway debut, especially his full frontal nudity. He’s naked on the floor of the stage for quite some time. I asked him if it gets cold up there. “I talk to stage manager a lot about it,” he said. Luckily he’s thrown a blanket at one point.

Not everyone made it down to Madison Square Park on 26th St. for the after party at SD26. They made a big mistake. Tony May has transplanted his famous San Domenico to this spot, and the food was the best so far this theater season. It certainly helped put the unsavory subject matter of “High,” the story of a recovering alcoholic nun/social worker who tries to help a 19 year old junkie. A little good pasta goes a long way!