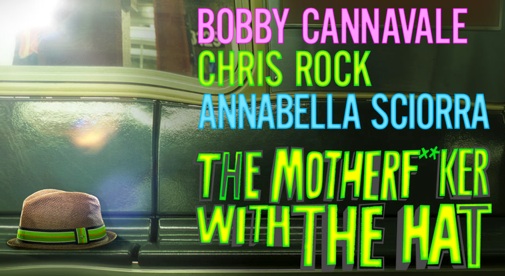 So the f word, which already makes dozens of appearances in “The Book of Mormon,” is literally all over Stephen Adly Guirgis’s uneven new play, “The Motherf**cker with the Hat.” It’s not just in the title, but in almost every line of dialogue uttered by the mixed cast–mixed by means of accomplishment. Bobby Cannavale is Tony Award calibre as Jackie, who lives with but isn’t exactly faithful to Veronica (Elizabeth Rodriguez, playing the Rosie Perez part). Annabella Sciorra is excellent as Victoria, who’s been cheated on herself by her husband, played by Chris Rock, who is Jackie’s best friend and AA sponsor.

It’s hard to evaluate Chris Rock in this play: he varies from awful to trying to pull it together. He rants very well–just like in his comedy. As an actor, though, Rock is stilted and often hard to understand. He gets credit for attempting this, but of course, a lot of the audience is there to seem him. They don’t realize til they’re seated that Cannavale is the lead; Rock is on stage half as much, if that. You do wonder if a full time actor had been used, would Ralph D. be better? I think so. In the meantime, the show is almost stolen by Yul Vazquez, as Jackie’s maybe gay cousin Julio.  Cannavale is so good, and when he connects with Vazquez in their scenes, it’s like two lights blazing.

“The M*** with the Hat” is a slight play, coming in around 90 minutes without an intermission. It lacks a real ending, so it just sort of tapers off. Guirgis moves his characters through a pas-de-quintet, as everyone struggles with loyalty and love. It’s not easy. Vazquez is the comic relief, and it’s much needed in what becomes an increasingly fruitless exercise.

This kind of play is like an indie film, and felt more like it should be off Broadway than at the Schoenfeld on West 45th St. It would have been perfect at the Public Theater. Even with its many virtues, “The M**” doesn’t stand up to a play like David Lindsay Abaire’s “Good People.” The producers may have thought this too, but it’s too late. Insiders tell me that business is almost non -existent, the play can’t be advertised because of the title. “They thought Chris Rock’s name would do the business, but it hasn’t,” my source said. I sat in the front row of the mezzanine, and there were plenty of empty seats.

In the audience: Ricky Gervais, Jerry Seinfeld, Lucy Liu, Paul Rudd, and Philip Seymour Hoffman, whose significant other, Mimi O’Donnell, did the costumes. Also on hand, “Anything Goes” star Sutton Foster, who told me she was “showing up for my guy,” Bobby Cannavale. No sign of lead producer Scott Rudin, who doesn’t attend his own premieres.