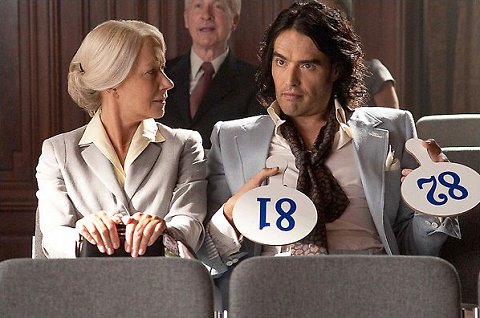 The remake of “Arthur,” a genial film from the 1980s that had charm brimming over, is headed for disaster. I haven’t been able to see it yet (my fault), but of the 14 reviews posted to RottenTomatoes.com so far, only one has been positive. The other 13 are so bad that “Arthur” is getting a 7% so far. The consensus is that director Jason Winer didn’t know what he was doing, and captured none of the spirit of the original. It sounds like the recent remake of “The Heartbreak Kid.” Whoops!

“Arthur” opens on Friday. The original, directed by the late Steve Gordon some 30 years ago, was a winner. Dudley Moore, Liza Minnelli, John Gielgud, and Jill Eikenberry were the principal cast–a rich kid, the girl he loved, the girl he was supposed to marry, and his butler. They’re now played by Russell Brand, Greta Gerwig, Helen Mirren, and Jennifer Garner. On paper it sounds grand. But the director, Jason Winer, comes from very clunky TV like “Modern Family” (which to me seems like “Arrested Development” lite) .

This is just a guess, but Dudley Moore was winsome and subtle. He was also small in size, which made him seem vulnerable. Russell Brand, whom I like a lot, is a big guy who doesn’t seem like he need to be taken care of. He is also quite obvious and a little aggressive. A better choice would have been James McEvoy or even Ewan MacGregor. Anyway, what’s done is done. At least we can hope Helen Mirren got a good payday out of it.

Comedy remakes–especially of material that is trickier than it appears–are tough. That “Heartbreak Kid” with Ben Stiller was so bad the people who made it should have arrested. Classics are often a part of their time–and in these cases, even more so. What these two –“HK” and “Arthur” — had in common were they were comedies of manners, and spoofed class warfare. No one seems to know how to do that anymore. I think writers and directors are afraid to suggest that class differences exist anymore. They’re all too politically correct.