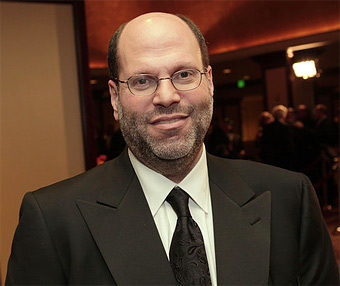 Remember during the Oscars I asked why Scott Rudin wasn’t coming out to Hollywood for the show? He had two Best Picture nominations, for “The Social Network” and “True Grit.”

Well, over the next couple of weeks we’ll see why: Rudin has not one but four Broadway shows opening, all tipped and buzzed as hits. It’s a record of some kind, even for Rudin, who often has two shows lined up. Last year it was “Fences” and “A Behanding in Spokane.”

But that was simple stuff. A week from today Rudin opens the hottest show of the season, “The Book of Mormon,” from Matt Stone and Trey Parker of “South Park” fame. The show is playing at 101% in previews, a week to go before opening night. And opening night is the hottest ticket in any town–the producers are hearing from childhood friends and former plumbers. Everyone wants to be there.

Once “Mormon” is open, Rudin has three more to go: a revival of John Guare‘s “The House of Blue Leaves” with Ben Stiller, Edie Falco, and Jennifer Jason Leigh; “Jerusalem” with Mark Rylance; and “The Motherf—-er with the Hat,” which brings Chris Rock to Broadway.

The amazing thing about “Mormon,” billed as “God’s Favorite Musical”? It has not one well known player in it. They are unknowns. The fact that Rudin already has a major hit, and with no stars, is reason enough to start calling him David Merrick 2011. Or better yet, Sol Hurok (for those old enough to remember…).

On Friday, Rudin starts the celebration with an A list lunch at the Four Seasons for “media elite.” I can still remember the furor the South Park guys caused with their movie, “Team America.” ‘The Book of Mormon” is said to be 100 times more irreverent. I can’t wait!

PS No one flies in any of his shows!