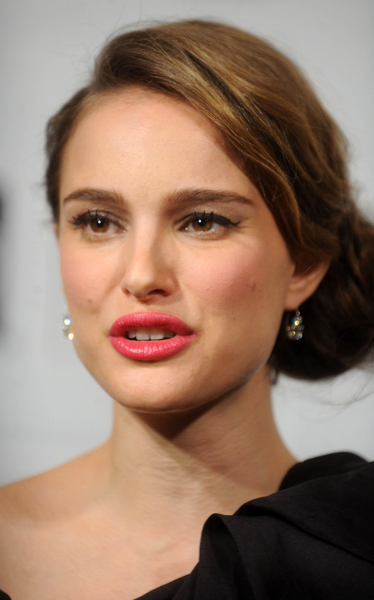 The Best Actress race is starting to take on its own personality.

For one thing, Natalie Portman may be in the same position Eddie Murphy found himself in a few years ago. Murphy, considered hot for Best Supporting Actor in  “Dreamgirls,” is thought to have undone himself by releasing “Norbit” A hideous comedy, the movie kicked Murphy back several notches. Winning the Golden Globe didn’t help either. Alan Arkin won the Oscar instead for “Little Miss Sunshine.” Murphy and his entourage got up and and walked out the Oscars in the middle of the show.

Portman, so hot herself right now in “Black Swan,” has some unfortunate releases coming up as awards season unfolds. “No Strings Attached” seems to be the coarse version of “Love and Other Drugs.” Foul language and situations, juvenile behavior–Portman is wasted in a “friends with benefits” relationship with Ashton Kutcher. Oy. The Ashton Kutcher library is really getting great. Circle January 21st for this disaster.

Then there’s Portman’s straight to video “The Other Woman.” This is a little bit of everything–“Stepmom” meets “An Unmarried Woman.” Natalie breaks up a marriage, has to deal with a stepson, gets pregnant with the new husband, and then the new child dies. She and the stepkid bond. Yikes. It’s hard to say which of these two films is “Norbit” and which is “Pluto Nash.” And get this: “The Other Woman” is already on Time Warner’s video on demand.

“The Other Woman” is also Lisa Kudrow‘s 99th bad movie with Don Roos. He made one good movie, “The Opposite of Sex.” The rest have been terrible. Kudrow should have been the biggest TV star of the 2000s. She could be Mary Tyler Moore and Lucille Ball all rolled into one. She just needs a great sitcom built around her in which the other characters like her. Is it that hard to do?