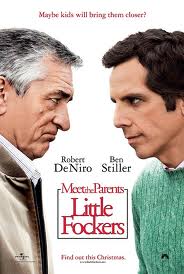 “Little Fockers” got pretty bad reviews, but audiences like it. The Robert DeNiro-Ben Stiller comedy–the third and last part of the trilogy that includes “Meet the Parents” and “Meet the Fockers”–has taken in almost $50 million. At a clip of $14 million a day, it’s doing great. For Universal, “Fockers” is a godsend. They needed a hit. (It’s also a partly Paramount feature as well thanks to their old deal with Dreamworks.)

“Fockers” is the only out and out comedy with stars for this holiday season. It’s counter programming to “True Grit”–also doing very well, and “Tron.” If you just want to laugh and have popcorn, “Fockers” is a relief.

‘True Grit” is also a hit, and will be the biggest release ever for the Coen Brothers. Not getting any Golden Globe nominations hasn’t affected its fortunes. Jeff Bridges has the biggest weekend of his career, with “Grit” and “Tron” in the top 5. He also won his Oscar in 2010 for “Crazy Heart.” I hope he’s celebrating.

Meantime, “The King’s Speech” expanded and, has nearly $10 million in the bank. The Oscar-tipped Tom Hooper film just continues to build and build. It’s the consensus film of the Oscar season. The feeling is everybody likes it, it’s the one film that Academy voters, nearly all reviewers (except for crazy Manohla Dargis), and audiences can all love. Plus, you can take the teens during the holiday. “Social Network” skews younger, “Black Swan” is edgier, “True Grit” is slower and retro, “The Fighter” is punchier.

I am still baffled by the positive reviews I’ve read for Sofia Coppola’s “Somewhere.” It’s not the moviemaking I couldn’t stand, it was the story. Meantime, watching “Toy Story 3” on Christmas night with family and friends was a treat. What a great, great film.