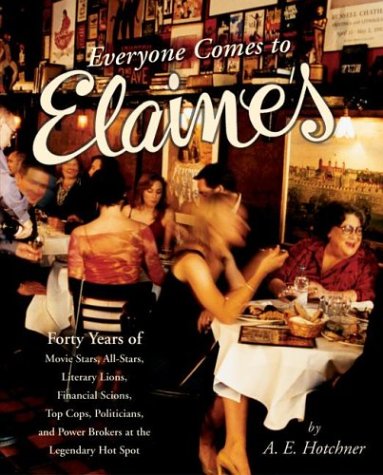 Last night, everyone actually did go to Elaine’s.

By 10pm, the entire restaurant on Second Avenue between 88th and 89th Streets was completely full, swollen with insiders, outsiders, regulars, gawkers, you name it.

Some came for dinner, others for reminiscing. Alec Baldwin caused a momentary flurry of excitement. Rosanna Scotto from Channel 5, local journalists like Linda Stasi, even Governor David Paterson — they were part of a crowd so thick you could barely turn around. The waiters carried trays over their heads.

Lewis Lapham sat quietly on the side lines talking to old pals. Carol Miller and Jim Kerr, famed New York deejays, rolled in late; Miller often drove Elaine home the three blocks to her house on weekend nights. Bob and Lynn Balaban, old friends, couldn’t even find a table. They’ll be back this week. The place was media-soaked, however, with all kinds of folks connected to radio, TV, etc. Marvin Scott was chatting up Lynne White. And so on. There were teary eyed hugs, and lots of toasts “To Elaine!” heard around the room. Spoons clanked against glasses and one good pal, a female FBI agent, stood on top of a chair and led the room in a group salute.

Expect more of this all weekend, as hundred of regulars pour the doors to pay their respects. And remember, you can’t sit at a table if you don’t eat dinner. As Elaine said to a guy who asked for a drinking table last year–she pulled his lapel down to her as she said it–“This is a f—–‘ restaurant, buddy. Either eat something, or get the f— out.”

PS Today’s New York Post has the story of Elaine and AE Hotchner totally backwards and upside down, wrong. Hotchner wrote a book called “Everyone Comes to Elaine’s.” After that, he also wrote a musical with Cy Coleman’s music. It was presented as a workshop for backers at Coleman’s home, with Lainie Kazan as Elaine. No one liked it, especially Elaine. She did hire a lawyer, and he put a stop to it. Hotchner did return to Elaine’s eventually. But that’s how it happened.