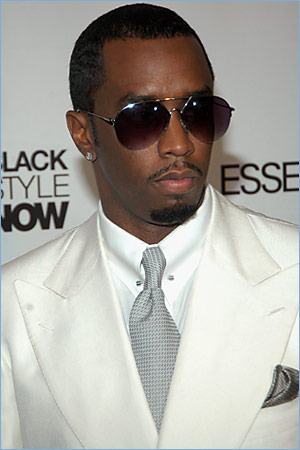 First Sarah Palin invented “refudiate” out of repudiate and refute.

Now Sean P Diddy Combs has invented “repercaution” out of repercussion and caution.

Isn’t it great that our finest intellectuals are working on changing the language?

“Repercaution” is a song on Diddy’s new album, “Last Train to Paris.” You can find some of the tracks streaming on Vogue.com. Why a fashion website? Because Combs is about fashion, not music. The new album actually features Vogue’s Andre Leon Talley and Anna Wintour, designers like Marc Jacobs, Tommy Hilfiger, Zack Posen, and Isaac Mizrahi doing spoken word bits.

Other song titles include “Ass on the Floor.”

The album is dripping with pretentiousness; tacky is not a quality Combs avoids.”What would you do if I was the perfect man?” Combs asks a girl between tracks. You know, Saltines are good for nausea.

On other hand, if you can skip through the bs, there are some nice R&B songs here, well sung by various guests, and no doubt sampled from everything. Combs’s singing, well, is not quite in fashion yet.

You know, if only Stevie Wonder had used bits from Pierre Cardin, John Weitz and Bill Blass — and Diana Vreeland and Alexander Lieberman–on “Songs in the Key of Life.” He would have had some career!