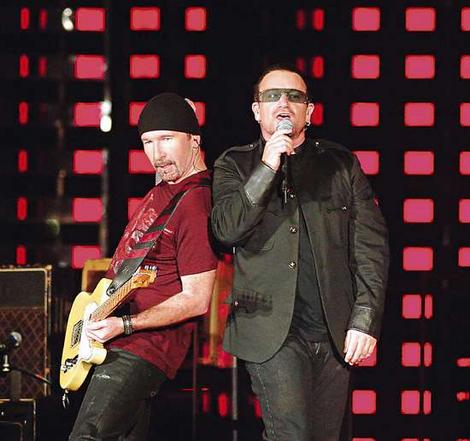 Bono and The Edge won’t be able to see “Spider Man: Turn off the Dark” before January.

They’re in Australia right now, and continue on a world tour with U2 until then.

After that, Teese Gohl, the show’s musical supervisor, will work them if adjustments are needed to their songs.

U2 fans will be happy to know there are 19 new Bono/Edge songs in “Spider Man” including “The Boy Falls from the Sky,” “Rise Above,” and “If the World Should End,” as well as a new “Spider Man” theme song–there is no mention of the old TV show theme. And–surprise!–Peter and Mary Jane dance at a disco to “Vertigo,” the only prior U2 hit in the show. I’m sure it was chosen for its title–Vertigo, heights, flying, etc. Get it?

There is also a little joke about the U2 song, “Sunday Bloody Sunday.”

Everyone in the music biz should take notice of this: “If the World Should End,” as sung by Jennifer Damiano in the show, is a Celine Dion like hit waiting to happen big time.