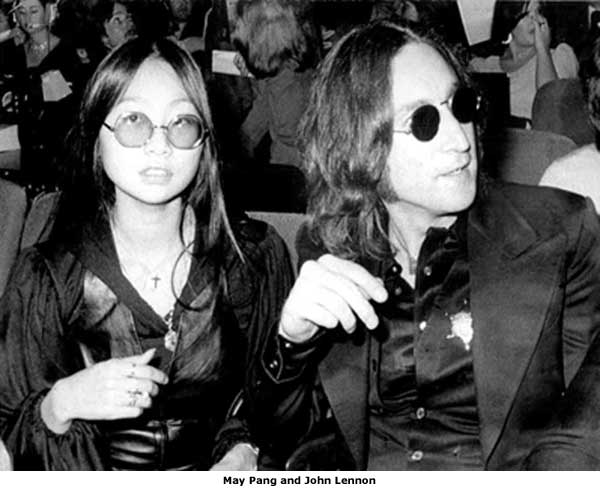 Monday night, finally, the screening of “LennonNYC” on PBS. This is the John Lennon film by Michael Epstein film you’ve heard so much about. Only one thing: as a document about Lennon’s life in New York and the US from 1970-1980, the film does much to erase May Pang’s role in his life. She was Lennon’s lover and confidante. These days, she’s a popular and beloved figure on the New York music scene.

Beatle fans will always debate certain arguments: Paul vs. John, Yoko vs. the Beatles. Let’s face it, despite being a talented avant garde artist and an interesting musical artist, Ono is hated by Beatles fans. She’s blamed for breaking up the Beatles and looking all the while like a dark figure from hell. In the film “Let it Be” she looks like death hovering over the group.

As a widow, Ono has done all she can to rewrite her history with Lennon. Even if Epstein (and isn’t it weird that his name is Epstein–the Beatles’ manager was Brian Epstein) didn’t give Ono official editorial control, she’s as in charge of “LennonNYC” as she was of the awful John musical that died on Broadway a few seasons ago.

The worst omission in “LennonNYC” is that of May Pang. Yes, she’s interviewed, but there’s no mention that she was Lennon’s lover. Cynthia Lennon wrote in her own memoir a couple of years ago that John continued to see May even after he went back to Yoko in late 1974 and through the time baby Sean was born (October 1975) for two more years. “The last time we saw each other was in ”78-79,” May told me. And they saw each other again in 1980 before Lennon died. They were always in touch with each other.

It’s really wild, actually, that Epstein is comfortable letting all this slide by–as if it never happened. He’s allowed Ono to minimize Pang and make it seem like she was a fun companion or something. This is completely idiotic.

Lennon’s biggest solo hit during the early 1970s was his “Walls and Bridges” album. It’s May Pang‘s voice singing backup on “#9 Dream.” It was Pang who encouraged Lennon’s friendships with Elton John and his possible reunion with Paul McCartney. All of that’s omitted from this film. What a shame. But Pang has chronicled her time with Lennon in a 1983 memoir that she’ll update soon, and a book of photographs that really tells the story of that period. They’re each available on amazon.com.

As for the rest of “LennonNYC”: there’s some great home video and pictures, courtesy of Ono. The material with Sean in the last year of Lennon’s life is terribly moving. The film’s lump in the throat is John telling Sean “See you in the morning.” All of the inner circle provides elucidation, including Bob Gruen, Roy Cicala, Earl Slick, and Jack Douglas.

But a lot of “LennonNYC” is suspect biography. Too bad. After 40 years, you’d think we could have gotten the real story at last.

(See more below about Lennon’s 1974 Thanksgiving show with Elton John.)