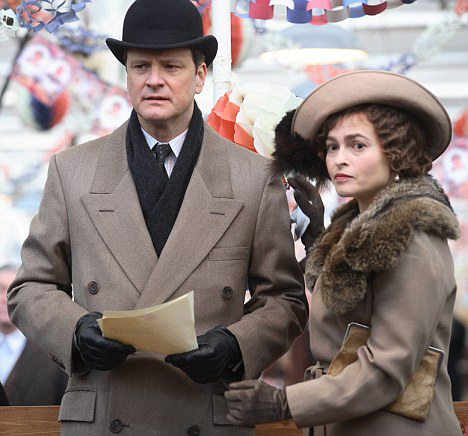 Helena Bonham Carter should be on “CSI.”

When she’s studying a real life character, HBC has a good trick up her sleeve. She uses her famous aunt, Renata Propper, to analyze the handwriting of any real life people she might be playing in the movies.

For “The King’s Speech,” the highly Oscar buzzed film that opened last night to cheers–literally–at the Ziegfeld, HBC asked her aunt to investigate the signature and cursives of the late Queen Mum, whom she plays so brilliantly in the film.

“I do a lot of research,” Helena told me proudly at post-party, held in the very swankily redesigned 44 restaurant at the Royalton Hotel. (Four stars to the makeover, by the way!)

Helena — in a knockout Vivienne Westwood gown– was surrounded by her relatives, all New Yorkers who emigrated here around 1949 from Britain, as well as her own mum.

Of course, HBC has played a number of kooky characters directed by her husband, Tim Burton, including Mrs. Lovett in “Sweeney Todd.” In those cases, Aunt Renata wasn’t able to do the research. “Not the fictional ones,” she advised.

What did they find with the Queen Mum? That she was a powerhouse, of course, who cut right to the chase. You can see it in the movie when it opens on November 24th. And Helena gets her just right–all the way to Best Supporting Actress at the Oscars, without a doubt.

Meanwhile at the “King’s Speech” premiere: famed beauty Marisa Berenson chatted with Harvey Weinstein about her new memoir, which she wrote in French and published in Europe; Christine Baranski congratulated director Tom Hooper, and actor Colin Firth, also also on their way to the Academy Awards; pop star Moby said he was “overwhelmed” by the film. “I thought it was going to be about a speech therapist,” he said, laughing.