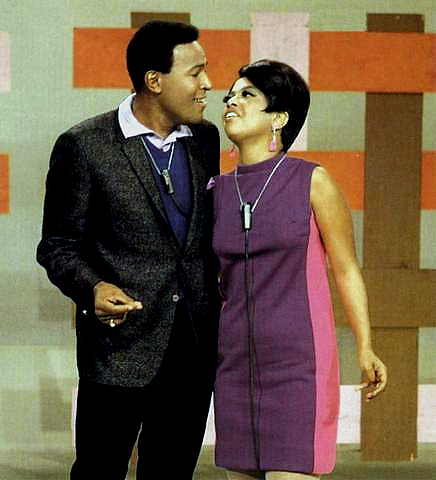 This is a link to an excellent documentary about Tammi Terrell, one of Motown’s great ladies–and a little forgotten, by now, along with Mary Wells, Florence Ballard, and– the very much still alive– Kim Weston.

Tammi, of course, is best known as Marvin Gaye‘s duet partner in the late 1960s on such Ashford and Simpson hits as “Ain’t No Mountain High Enough,” “Your Precious Love,” “You’re All I Need to Get By,” and “Ain’t Nothing Like the Real Thing.”

What a sad story: According to this account, Tammi–who died at age 24–was raped as a teenager and then in two abusive relationships with James Brown and David Ruffin. (The latter is really upsetting. I’ll never be able to listen to “Walk Away from Love” the same way again.)

One thing I’m not completely in agreement with: that Terrell’s death sent Marvin Gaye into a depression drug spiral downward. Yeah, maybe. But Tammi died in 1970, and Marvin managed to put out a series of extraordinary albums and songs from then on for a decade. From “What’s Going On” to “Let’s Get It On” to “Sexual Healing” and all the rest of it. So, it’s a little melodramatic to say her demise from brain tumors eventually killed him.

Two more videos to check out:

Neil Rosen‘s lovely tribute to the Brill Building sound at: