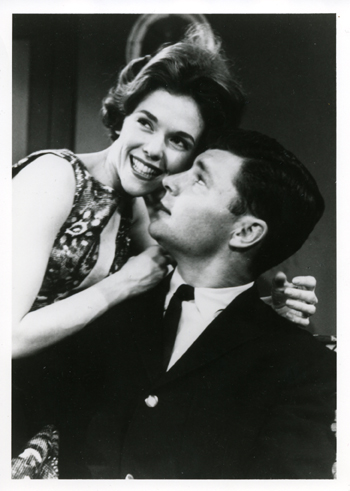 Over the years the little town of Oakdale, Illinois was joined by villages on the P&G soap map created also by Irna Phillips and Agnes Nixon. Bay City (“Another World”), Springfield (“Guiding Light”), Henderson (“Search for Tomorrow”) and Monticello (“The Edge of Night”) were all small towns that happened to be big cities too. Everyone knew each other, but the towns had international airports, beaches, rivers, docks, world class billionaires, surgeons, and lawyers, and a few working class families.

There were rarely Jews or blacks in the P&G towns. There were no Asians. Even though President Kennedy was shot during “World Turns” live half hour in 1963, it was never mentioned by the characters. When the World Trade Center attacks happened, it registered barely a blip in Oakdale. They had enough to worry about. Only recently did gay people come to town, and that was because the producers knew the run was nearly over, and there was little to be lost. (In fact, funnily enough, the gay story became one of the most popular.)

And maybe that’s why we loved it. Oakdale, Bay City–they were steps out of time, lives on alternate planets.How refreshing and relaxing it was to zone out for an hour and let the little problems of the Hughes  and Stewart families in Oakdale take over.

And now, after five decades, the people will live on You Tube and in memory. P&G wanted out, and they got out. It was ugly. At “Guiding Light.” they tortured the cast, crew and fans for 18 months before letting them all go. On “World Turns,” the same producer P&G used to shepherd out “Another World” –Christopher Goutman–just gored the show and let its carcass be eaten by bugs. This summer, instead of giving the fans returns of old characters, and resolutions of 50 years, he wasted four precious weeks by locking fictional fashion designer Barbara Ryan (the gorgeous 32 year vet Colleen Zenk) in a warehousewith an inanimate party clown. It was if P&G were saying, “We want you to have terrible memories of the end.” Congrats, guys. You did it.

Besides Zenk, there are about a dozen “vets” on “As the World Turns.” Everyone talks about who got their start on soaps, but it’s the actors who stayed, or who were able to deal with P&G, that made the show so memorable. Don Hastings, Kathryn Hays, Eileen Fulton, Ellen Dolan, Scott Holmes, Elizabeth Hubbard, Kathleen Widdoes, Marie Masters, Anthony Herrera, the recently passed matriarch Helen Wagner, and the amazing Larry Bryggman, who did come back to help clean up. When we were kids, the late Henderson Forsythe was also one of the show’s mainstays and we loved him as Dr. David Stewart. Pat Bruder was his long suffering wife Ellen. Rosemary Prinz was the first soap “star” as Penny Hughes.

There are only a few soaps left, and they’re all heading to their ends. Soon bouts of blindness, paralysis, amnesia, sudden discoveries of paternity and maternity (only on a soap could a mother not know she had a child), hysterical pregnancy, reversed vasectomies, murder, kidnapping, stalking, and one death from falling up, not down, stairs (Dan Stewart’s wife, Liz)– will be things of the past.