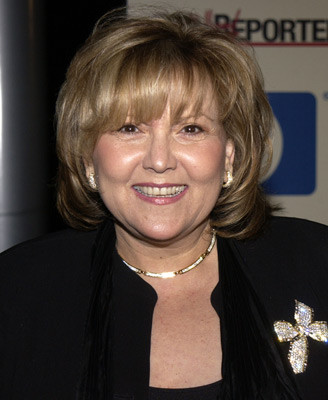 Okay, I’ve always liked Brenda Vaccaro. She was so hot in the 60s and 70s. Remember her in “Midnight Cowboy”? In “The Name of the Game”? In a seminal episode of “The Fugitive”?

She lived with Michael Douglas, she was at the center of Julia Phillips‘s “You’ll Never Eat Lunch in this Town Again” kind of Hollywood. She’s been married four times–the fourth was a keeper, as it turned out–and she could write a book about how to survive in Hollywood.

Emmy voters, Brenda is nominated for Best Supporting Actress for her work in Barry Levinson’s “You Don’t Know Jack.” She plays Dr. Kevorkian’s sister, Margo. The HBO film is nominated for several awards, for Levinson’s skillful direction, for Al Pacino’s splendid Kevorkian, for Susan Sarandon’s brave portrayal of the head of the Hemlock Society.

But it’s Brenda Vaccaro’s turn. She won an Emmy, in 1973. And a Golden Globe. The same year Michael Douglas swept the Oscars–1976– with “One Flew Over the Cuckoo’s Nest,” Brenda was nominated for “Once Is Not Enough.” (She was always good with David Janssen.) She lost to Lee Grant, for “Shampoo.”

“Lee told me, It’s alright, I’m older,” Brenda told me, laughing, on the phone this week. Vaccaro got a Golden Globe. “Billy Wilder called them the Golden Gloves. No one took them seriously,” she said. She has three other Emmy nominations,too– one for “The Golden Girls.”

Brenda’s known Al Pacino all her life pretty much. “We were both managed by Marty Bregman. So were Faye Dunaway and Alan Alda.” When Levinson called, he told her to go meet Pacino to see how they’d get along. “I said, I know him!” Nevertheless, they met, and the chemistry was so good it was obvious she was meant to play this part. She read “five or six times” for Levinson–it wasn’t a snap call. But when she heard Armenian music on NPR one morning, and fell in love with it, she knew the late Margo was sending her a message. “It was a sign,” she says.

So now? Brenda has an Emmy gown all ready, designed by Lorena Sarbu. And she’s enjoying the attention. “It’s been delightful,” she says. “My agents have been very attentive.”