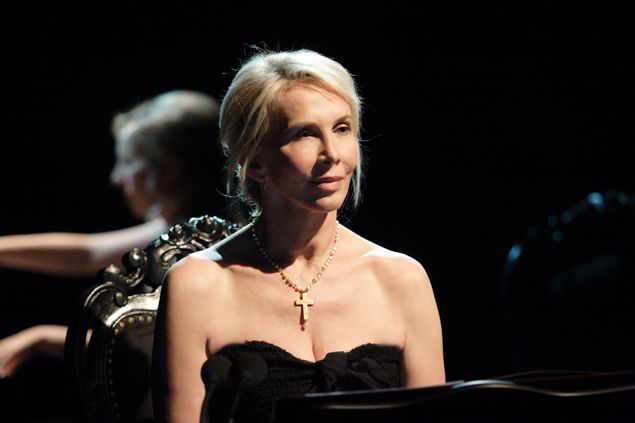 Sting is a major rock star and Trudie Styler, his wife, is a political activist and movie producer with an acting background. So you don’t expect them to go all 19th century, but that’s what they did last night at Jazz at Lincoln Center. In the Allen Room, for a charity called the Culture Project and Music Unites, they performed their own version of an 1837 “Love Letters.”

With a background of the sun setting over Fifth Avenue almost on cue, Sting and Trudie performed their two hander, “Twin Spirits,” that’s based on the letters back and forth between composer Robert Schumann and his decade-younger pianist wife Clara Wieck. This time they had help from actor David Straithairn, who narrated, and Joshua Bell on violin, and singers Nathan Gunn and Camille Zamora.

The audience consisted of no less than Mayor Mike Bloomberg, Denise Rich, actor Richard Kind, screenwriter Geoffrey Fletcher, movie producer Bonnie Timmerman, and classical pianist Steven Masi, and loads of well heeled patrons who donated to a fund that keeps music education in schools. They got their money’s worth, too: the piece, conceived by John Caird, is a keeper. It’s also well-tailored for the couple.

Sting has done plenty of acting in movies, plays and videos. So no one is taken aback by his excellent reading of the slightly huffy Schumann. (They share the trait of being prolific, and blend a bit.) Not so well known is that Styler began her career at the Royal Shakespeare Company with Caird in 1981.

As Clara, she is luminous and captivating. I think a lot of people are genuinely surprised. But as she and Sting reprise this performance for various charities, Styler gets better and better. Last night, with the sun melting and disappearing behind her, Styler–more beautiful and better dressed than Clara Schumann could have hoped for–captured lightning in a bottle.

Later, some patrons repaired to the couple’s Central Park West duplex aerie, where a hot jazz combo played some re-made pop songs. When they launched into The Police‘s “Walking on the Moon.” Sting said, “I know that song,” and sang along. Fletcher talked about his new movie, which Timmerman will produce. Book publisher Roger Cooper, of Vanguard Press, was excited about coaxing Styler into writing a book. Denise Rich said she did not have money with Ken Starr, after all. (We’ll see.) A nice, young, wealthy couple from Los Angeles told me about how they fly all over the country to see Sting perform in different locales.

And the kids: Mickey Sumner, Sting and Trudie’s eldest actress daughter (not counting Kate, Sting’s eldest daughter from a previous marriage), talked about just returning from the Sundance Film Lab, where she starred in an experimental film. And now, while Sting heads back on the road, Styler is off to London to see 18 year old daughter Coco, a budding pop star, perform. Son Jake is in Africa shooting a documentary. They will all reunite July 13 and 14 when Sting brings his “Symphonicities” tour to the Metropolitan Opera House.

And what are you doing this week?

PS Thanks to pianist Jeremy Denk, I think I’ve figured out where the music from the annoying Cymbalta commercials comes from. Check it out: the music in the commercial sounds like it may have been derived from Robert Schumann. In the video below, listen to Schumann’s Kinderszenen, Opus. It’s not plagiarism or sampling in this case. Just a clever composer who interpolated a piece of classical music. It explains a lot. And Schumann was kind of a depressive. He died at age 46.