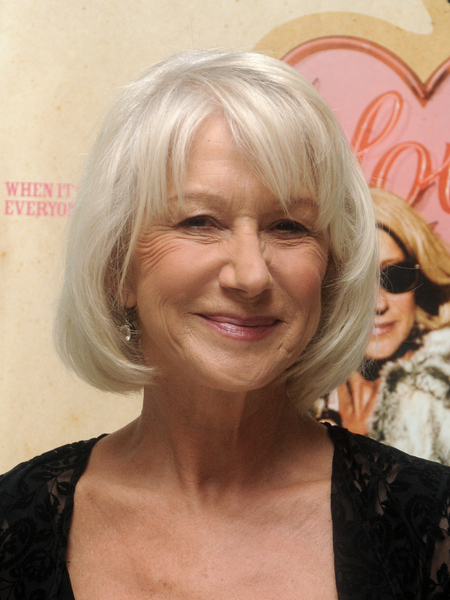 Last night, Helen–who stars in the excellent “Love Ranch,” opening today in limited release–told me at the film’s premiere: “I didn’t think it was such a big deal. I couldn’t believe the reaction. I didn’t show very much.”

A friend reminded her: “This is America, Helen. Everything is a big deal.”

Mirren responded, after thinking about it: “No one in Europe or Britain would have cared.”

Mirren has been suddenly very controversial. After making comments criticizing British Petroleum for their travesty in the Gulf of Mexico, she got trashed in the UK press yesterday.

On David Letterman‘s show, she called BP “Bloody piss poor.” Good for her! Here’s the video. Check it out at 6:20.

The premiere of “Love Ranch,” a movie that’s had an unfair financial history, was pretty interesting, however. Among the guests were Mirren’s husband, the great Taylor Hackford, who directed the film; co-stars Sergio Peris-Mencheta and Elise Neal, as well as financier Henry Kravis and his philanthropist wife Marie-Josee Kravis, who’s among other things president of the Museum of Modern Art; plus Jane Rose, who’s managed Keith Richards and worked with the Rolling Stones for eons; “Hotel Rwanda” director Terry George; bestselling crime writer Phil Carlo; restaurateur/actor Paulie Herman; and famed director Julie Taymor, in whose film version of Shakespeare’s “Tempest” Mirren will shoot for an Oscar nomination this fall.

Who wasn’t there? Why, Joe Pesci, who co-stars in “Love Ranch” with Mirren as the owner of the original legal Nevada brothel. This is Pesci’s first movie in 10 years. But he was in New Jersey tending to his ill, elderly mother. He sent in his place his sister, his daughter, and the very cool Tommy DeVito, an original member of Frankie Valli’s Four Seasons.

After the screening, a group headed down to Il Cantinori in Greenwich Village, where former congressman Harold Ford, Jr. was very thrilled to meet Mirren and Hackford. There was also much discussion of the remake of “Arthur,” which Mirren starts shooting shortly all over the city. She plays Hobson, Arthur’s nanny, the role made famous by John Gielgud in the original. Russell Brand is Arthur; Jennifer Garner picks up Liza Minnelli’s role of Susan.

“Love Ranch” opens today, and then goes wider a week from Friday. Don’t miss it. No, there are no vampires in it. And Tom Cruise doesn’t ride around on a motorcycle with a shit-eating grin. “Love Ranch” is inspired by a true story. Sergio Peris-Mencheta comes from Madrid, and he’s from the same acting teacher as Javier Bardem and Penelope Cruz. This is his American debut.

Both Gina Gershon and Taryn Manning are terrific as working girls on the ranch. Pesci is a lunatic, and we love him. But Mirren is a standout, as usual. It’s just fascinating to watch the wheels turn in her head as she works out a scene. And the story–of how her character, Grace, falls for a younger boxer–is powerfully handled by Hackford.