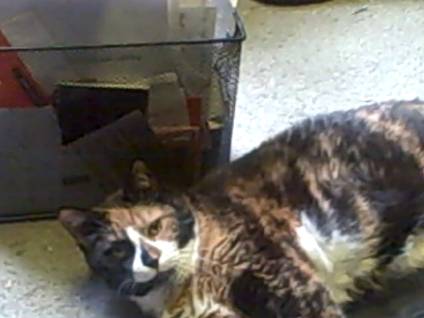 If you’ve been wondering why the posts have been fewer than usual this week. I’ve been dealing with a sad situation. Today, at 3:15pm, I had to put down my beautiful Calico cat, Bianca. She was 16, and her interests were divided between walking across the very keyboard upon which I am now typing, testing various flavors of expensive, designer cat food, and sleeping in the warm sunlight that comes through my living room windows.

Bianca was a rescue cat I found at PetCo in Union Square in late September1997. The people at PetCo called her Mother Theresa, because she took care of the other cats. She came with a little report card that said she was one year old. Later, the vet said she was probably three and had had at least one litter. We never learned anything about her biological family, but she never seemed interested in finding them.

And why would she? Here Bianca had a pretty good life. She was named for beautiful Bianca Jagger because, upon joining this household, she sat and listened to the Stones‘ “Bridges to Babylon” album. She didn’t care for it, and I do recall discussing the whole kd lang business with her. She preferred the “Some Girls” era.

In her younger days she clawed her way through some of the best cashmere and nicest made suits money could buy. She often ate from the Jefferson Market and Citarella. She had her own assistants for years, Wanda, and then Jamie, who came and fed her when no one was home. In more recent months she boarded at the vet, which she treated like a spa hotel. On the bills you could see the room service charges.

Bianca had no immediate survivors, but she was preceded in death by Tina, an extraordinary gray tabby who also lived to 16 and died in January 2002. Services are private, because I don’t want to get caught spreading her ashes in our local garden.