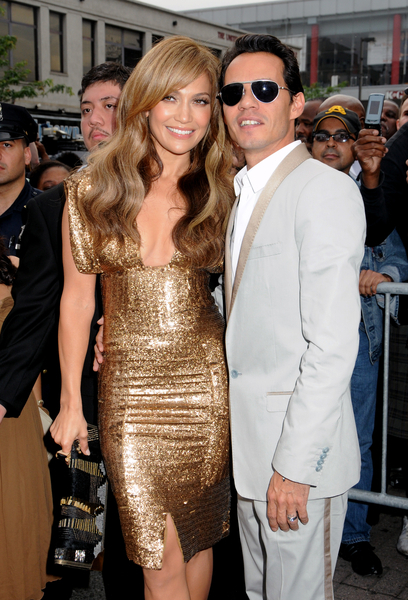 Aretha Franklin stole her own show last night when the Apollo Theater gave her a Lifetime Achievement Award. The Queen of Soul was not scheduled to sing, just come, look royal, and accept her award. She did all of that with grace and style, giving a loyal speech without Teleprompter or cue cards. She looked great, too, because she’s still losing weight.

But maybe Franklin, who’s quite savvy, changed her mind after hearing a bunch of great singers like Leslie Uggams, Estelle, and the mighty four foot eleven powerhouse Sharon Jones. That may have been enough to alert Aretha it was time to show who’s in charge. As she finished her speech, the band launched into “Rock Steady.” So did Aretha. She took the mike and started singing, and it was like manna from heaven.

The audience went wild, and emcee Jamie Foxx–hilarious throughout the show–was actually short of comments.

Franklin’s surprise prompted Marc Anthony to do the same thing. When he and Jennifer Lopez accepted the Ruby Dee and Ossie Davis Humanitarian Award, they were charming and articulate. The couple had actually gotten to the Apollo on time with manager Benny Medina and were in their seats before most of the audience. After the award presentation, the couple exited the stage but Foxx called Anthony back to the mike and prodded him into singing a bit of his hit, “I Need to Know.” Foxx jumped in and finished it. Another impromptu triumph.

I couldn’t help feeling bad for JLO, though. She was the only professional singer in the room who didn’t go near a mike or attempt even to hum. Subsequently, after they received their award, the Anthonys split and didn’t bother attending the gala in massive tent behind the Apollo. Franklin, however, settled into a spot in the center of the room, and chatted away with lots of fans. Foxx and the rest of the night’s performers also mingled with the crowd. Perhaps Lopez was nervous about someone mentioning the lack of her vocalizing. Or maybe it was just that they have twins at home.

But it was a great night at the Apollo with even some surprise guests like Oscar winner Marcia Gay Harden. Why was she there? “I live in the neighborhood,” she said. R&B legend Chuck Jackson was on hand, as were Al Roker, Gayle King and Reverend Al Sharpton. Both Angela Bassett and Danny Glover helped with tributes respectively to Lena Horne and to Franklin. Leslie Uggams showed why she’s a legacy star belting out Horne’s “Stormy Weather” with unexpected brilliance.

And then there was Chris Tucker, who sat in Franklin’s booth most of the night. But he was really there to accept Michael Jackson‘s posthumous Lifetime Achievement Award. He and gospel great Donnie McClurkin helped lead the audience through “Heal the World” and “Earth Song.” Tucker even threw in some modified Jacksonian dance steps.

PS The Apollo is known for its showcasing newcomers. Last night was no exception. They put on Clark King of Atlanta, a recent showcase winner. Clive Davis, are you listening? This is your guy. The video below is distorted thanks to a cheap camera. But I’m telling you, change his name to Kent and you may have the next Adult Contemporary Superman.