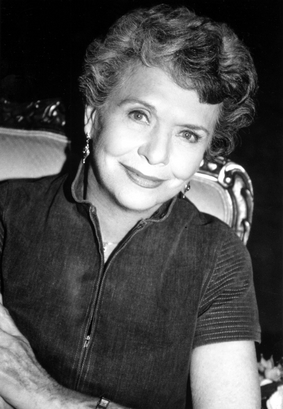 Helen Wagner passed away on Saturday at age 91. As Nancy Hughes, she uttered the first words on “As the World Turns” in April 1956. Her last episode aired just last month, marking the return of Oscar nominee Julianne Moore as her granddaughter.

It’s ironic, because “World Turns” only has about fifty episodes or fewer left to tape. It was canceled last year by CBS and will end its 54 year run on September 17th.

Somehow, I think, Wagner didn’t want to give CBS and Procter & Gamble the satisfaction of sticking around. Now they will be forced to make almost the end of the run a tribute to her.

Wagner’s character, Nancy Hughes, started out as a meddling mother-in-law and sister-in-law. But over the years, she mellowed and become a matriarch to generations of crazy stories and a variety of characters. Nancy, however, never lost her edge. Wagner, according to people I’ve spoken to over the years, had one, too. That’s probably why she lasted so long. She’s in the Guinness Book of Records for playing the same character the longest on television.

With Wagner’s passing, the era of soaps and in particular P&G’s role in them, is coming to a close. Just recently, Frances Reid of “Days of Our Lives” passed away, as did James Mitchell of “All My Children.” The few remaining soaps rarely feature people with white hair. Older people are not welcome as they once were on daytime. It’s one of the mistakes that’s cost the business of daytime dramas its future.

During the show’s heyday, from the mid 80s to the mid 90s, Wagner played some juicy stuff, too. She was the main actor in scenes with a very green Lauryn Hill, believe it or not. It might be nice to hear from the Fugees singer about her pre-fame era.

Let’s hope that CBS gives Helen Wagner a proper send off. They’ve canceled the show; there’s nothing to lose. And everything to gain.

One more thing: Julianne Moore did tell me recently that on the day she made her appearance, Wagner was still giving her direction about where to sit, and how not to cast a shadow or block the elder actress. You have to love it. We should all be that way at 91! Nancy Hughes, rest in peace.