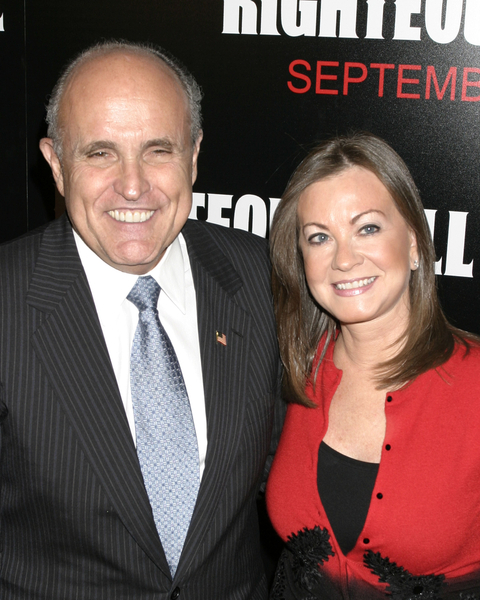 Ten years ago tonight I happened upon Mayor Rudolph Giuliani out on a date with his girlfriend, Judith Nathan.

It was April 28, 2000, a Friday night, around 11:30pm. I’d been eating dinner in Elaine‘s on Second Avenue and East 88th St. when two people who knew the Mayor and his entourage came in for a bite. They told me, “Do you want a scoop? The mayor is across the street at Cronie’s on a date.”

I jumped up. Rushing through Elaine’s bar, I grabbed a friend. “I need a witness,” I told her. We crossed 88th St. and walked past the Mayor’s idling SUV and another car from his entourage. We entered Cronie’s–now called Cafe d’Alsace. It was an old fashioned pub that smelled faintly of beer.  Along the dimly lit bar, members of the Mayor’s staff were having drinks.

At the bar, I ran into a friend who was trying to pick up a cute blonde. Trying to look non chalant about my business, I tried to strike up a conversation. My friend, Tommy, shot me a dirty look that said, Get away, you’re bothering me.

The Cronie’s bar ended in a space that led to a romantic alcove in the back. There, sitting side by side, were the Mayor of New York, who was married, and a middle aged brunette. The mayor had just announced the day before that he had prostate cancer.

“If that isn’t his oncologist,” I said to my companion, “he’s in big trouble.” We lingered, long enough to ascertain that the Mayor was not receiving medical advice.

Back in Elaine’s, everyone wanted to know what happened. I told them, and Sid Zion, the lawyer and journalist who has since passed away, jumped up. He put on his hat and hustled out the door to see what was going on. I recall thinking, it looks like a movie from the Forties, like “The Front Page.” This was news.

We followed Sid back to Cronie’s, only to find that the Mayor’s staff had whisked him out of the place in seconds. They knew he’d been “made.”

I remember talking to the owner of Cronie’s, a tall man with white hair. He asked us, “Are you Rudy groupies?” I was shocked. I responded, “Does he have groupies?” I asked him if the Mayor was a regular customer. “Yeah, he comes in here all the time,” he said. With this woman? I asked. “Yes,” he said. “Sometimes they bring his son.” That meant Andrew, who was 14 years old in 2000.

So I had my story. The only problem was, no one knew who this woman was– and Fox News, for which I wrote a daily column, didn’t want it. “Roger Ailes has a close relationship with Rudy Giuliani,” I was told. “Someone else would have to run the story first. Then we can quote it.”

I turned to my friend Mitchell Fink at the New York Daily News. He ran a story on Tuesday, May 2nd after I called him to explain the situation. In the meantime, knowing that Fink was going with the story, Page Six in the New York Post ran pictures that day that had been taken recently of the Mayor and Judith Nathan, a divorcee, and her 16 year old daughter having Sunday brunch. Now the cat was out of the bag. Here’s a clip from the Daily News on May 4, 2000: http://tinyurl.com/2w5gycs

I finally was able to claim the story on May 3rd, even though the “scoop” was lost thanks to Fox News’s reticence. Still about ten days later, Joyce Purnick graciously gave me credit for it in the New York Times. http://tinyurl.com/2claccr

The result, of course, was marital mayhem at Gracie Mansion. Within days, Donna Hanover –who obviously knew her marriage was in trouble four years earlier when Rudy was picking out dresses for his press aide–appeared at the foot of the driveway at the Mayor’s home for a press conference. Her years of public humiliation were over. Rudy went to live with a gay couple on the Upper East Side (no joke). Donna filed for divorce.

It’s hard to believe a decade has passed. Rudy’s philandering, his subsequent marriage to Nathan, etc, all pretty much ended his political career. His next bad relationship was with ex Police Commissioner Bernie Kerik. Now he’s raking in millions in private practice. Donna Hanover married her childhood sweetheart, and presumably lived happily ever after. Cronie’s closed a couple of years ago. Too bad–it was a nice, out of the way pub where members of the Yankees went on secret dates. It looked the place described in Billy Paul‘s song, “Me and Mrs. Jones.” If you remember, they “had a thing going on.”