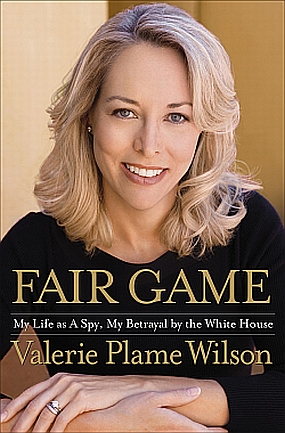 Valerie Plame Wilson: you remember her. She was outed as an undercover CIA agent by now-deceased journalist Robert Novak. He’s in jail. Valerie was married (and still is) to diplomat Joseph Wilson, who was critical of Bush/Cheney. The reveal was said to be retribution against Wilson. This all happened in the beloved Cheney administration.

Now Plame has a lot going on. The Doug Liman directed film about her life, called “Fair Game,” will debut in Cannes next month. Expect a lot of heat.

Plame and Liman were guests last night at a screening of a new documentary about nuclear disarmament called “Countdown to Zero.” It’s directed by Lucy Walker and produced by Lawrence Bender, who’s mounting a massive online and college campus campaign akin to his “Inconvenient Truth.” This gang is going all out to spread the word about the scary realities of nuclear war.

Plame was drafted into the cause because her specialty at the CIA was working on whether or not Iran had a nuclear weapon. Now hat’s ex-CIA, Plame can talk about the dangers of nuclear weapons, who has them, who’s trying to get them, and why it all has to stop now. She’s an effective speaker–it turns out she’s also a knockout–and communicates well on film and off.

During a Q&A after dinner at the Plaza Athenee dining room–in front of a room of media types and politicos–Plame introduced herself as “no longer the scandal girl.” She was “outed” in 2003. She’s finally been able to move on. “I’ve had a lot of time to get used to not being with the CIA,” she told me.

Interestingly: in this crowd of liberal minded types were Rupert and Wendi Murdoch. Mrs. M. heartily congratulated Walker when the film finished. (I wonder if Murdoch will start pushing peace on Fox News. After all, James Baker is in the movie.)

:Countdown to Zero” will open July 9th in a limited run. It’s a terrific film, must-see viewing this summer. No one likes to think about nuclear weapons and war, but Walker makes the subject clear and fascinating. More on “Countdown” closer to release day.