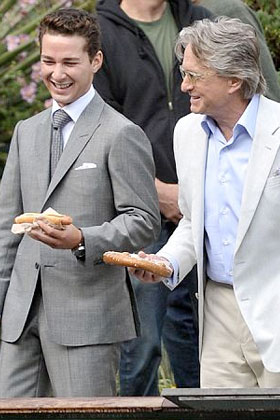 There are two reasons for this: one is that they’ve submitted the film to the Cannes Film Festival and are awaiting word. It’s more than likely that Cannes will take it, especially with Michael Douglas, Susan Sarandon, Josh Brolin, Shia LaBeouf, Carey Mulligan, and Charlie Sheen in the Oliver Stone cast. What a group for the red carpet !

Second, Fox feels that Sept. 24th is a better bet for Oscar nominations. This may be true, but as long as I’ve been writing about Hollywood, September has been a toss off month. Last year these were the movies released during that week: “Capitalism A Love Story,” “Rage,” “Fame 2009,” “I Hope They Serve Beer in Hell,” “The Boys Are Back,” “Coco Before Chanel,” and “Paranormal Activity.” Only the latter had a pulse, but it was a genre film. No Oscar touted film is released in September. Period.

This turn of events throws a monkey wrench into publicity already churning for “WS2.”. Michael Douglas is on the cover of Vanity Fair right now promoting both “Wall Street 2″ and his excellent indie film “Solitary Man” which also costars Sarandon and Danny DeVito. (This is a must-see film.)’ There’s also a Lincoln Center tribute scheduled for him on May 24th. The publicity and marketing are in place now for “Wall Street 2,” not next fall.

“Wall Street 2″ is indeed a perfect Cannes opening night ‘ the glamour quotient alone will have the place in an uproar. But to make a closing night film might be problematic since the Lincoln Center event would be the next day in New York. Sacre bleu!

Now that they’ve opted for September, Fox might just be better off and wait for the Toronto Film Festival (Sept. 9-18).

Meanwhile: there’s now a rumor that Julian Schnabel may take his new film, “Miral,” to Cannes as well. His “Diving Bell and the Butterfly” started there, and the results were both Best Picture and Best Director nominations at the Academy Awards. Schnabel and Stone at one Cannes ‘ it’s too much to think about!