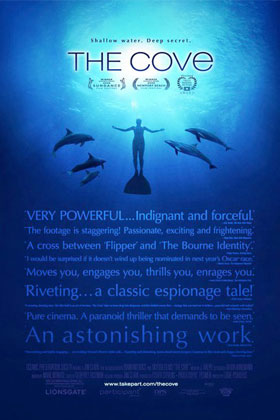 Now that “The Cove” has won Best Documentary, the world is an oyster for director Louie Psihoyos.

I am told that Psihoyos and his team are in deep discussions with Quentin Tarantino’s long time producer, Lawrence Bender, to make their next film.

The new film is even deeper than “The Cove.” It’s about the extinction of species, and what we can do to stop it before it happens.

Currently there are hundreds of thousands of species that are vanishing all over the world, from small to huge. Psihoyos’s new project would follow the list of extinct-prone animals and organisms, and the battles to save them.

According to one report, nearly 17,000 different plant and animal species are currently in danger of extinction, along with the record business and investigative journalism. But Psihoyos will just address himself to the former.

Oddly enough, I’ve also heard that the latter ‘ investigative journalism and its gradual demise ‘ may be the subject of another doc by a nominated filmmaker, Robert Kenner (”Food Inc.”).