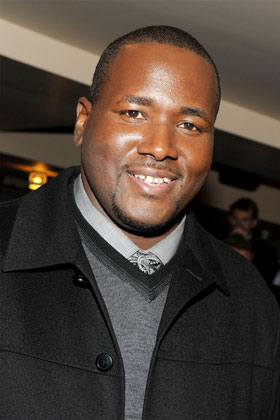 Every Academy Award success story carries with it a tale of someone who’s been forgotten.

So let’s say I was a little astonished to find actor Quinton Aaron waiting for a car outside the Kodak Theatre after the Oscar show was over.

Who is Quinton Aaron? Well, while Sandra Bullock was accepting kudos for her Oscar for “The Blind Side,” someone obviously forgot that Quinton played real-life football player Michael Oher. Which is a little shocking: There would have been no “Blind Side” without him.

“I did get two tickets to the Vanity Fair party,” he said, “so I’m waiting for my date to come pick me up.”

Aaron is 26 years old and was born in the Bronx. He is an actor, not a football player. He is not his character. It’s funny: The first thing Gabby Sidibe said to me after the first screening of “Precious” was: Please tell everyone I am not this character. Oprah embraced her. Gabby was treated like a queen at the Oscars. But Quinton Aaron was the forgotten man.

Later, I did run into Quinton at the Vanity Fair party at Sunset Towers. He was smiling and taking pictures with fans. He was far apart from Sandy Bullock, who was in the middle of a crush of people. She waved to Quinton. But somewhow, I suspect, the Bronx actor who’s mostly played bodyguards on shows like “Law & Order” has wound up on Hollywood’s own blind side.