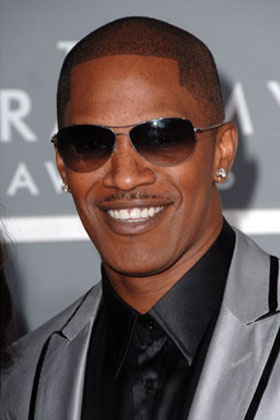 The new version of “We Are the World” went up on iTunes last night, and you can see it everywhere at 2 p.m. Saturday. Get all the info at www.world25.org.

Justin Bieber opens the song, but is followed in quick succession by Jennifer Hudson – who just about steals the whole recording. Quickly we see and hear Jennifer Nettles of Sugarland, Josh Groban, Tony Bennett, and of course Barbra Streisand.

One of the many treats of the new recording: Jamie Foxx. He gets a solo as himself early on, and then later cracks J-Hud up when he’s imitating Ray Charles. It’s a nice nod to the original record from 1985.

And yes, there is a lot of Michael Jackson, his voice ringing clear and true. I don’t know if much can be said for sister Janet, who seems to be mouthing the lyrics and not really singing. In the long form video, there’s also not terribly impressive vocals by Michael’s nephews. Ouch.

But Fergie and will.i.am, Wyclef Jean–singing in Haitian, and plenty of others get face time. Gladys Knight doesn’t have a solo but she’s front and center in the video as is Natalie Cole. Adam Levine from Maroon 5 has a nice solo, and Pink does, too. Carlos Santana gets lost a little bit in the mix. But with 85 artists, what can do you?

All in all, it’s a brilliant effort considering it was made ten days ago. Director Paul Haggis has cut in moving footage from Haiti, and producer RedOne did an excellent job with a rap section in the long version. Now it’s time for the downloading to begin–$2.99 gets you the song and the video from ITunes, and all the money goes to Haiti. All of it.