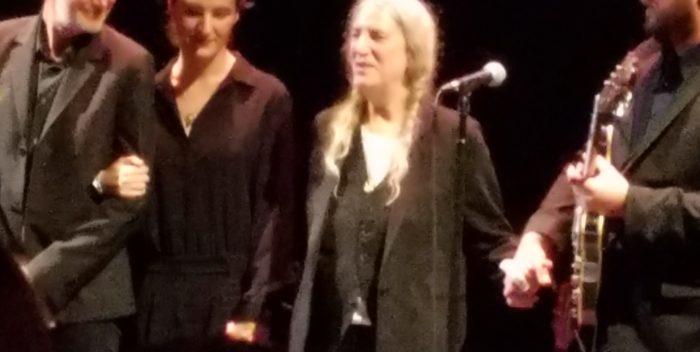 Patti Smith is nearing 72 years on this planet and I only mention that because it seems impossible. Her performance last night at the Minetta Lane Theater– her third in a row, produced by Audible.com– was absolutely extraordinary. If you didn’t know her history– and you may not–you’d think she was at least twenty years younger.

But, you know, I’m a decade younger, and I saw Patti in her early days playing in the East Village, CBGB’s, the Ritz etc, when she was dubbed the Queen of Punk Rock. But she was really a poet and so much more than that.

If rock writers in the mid 70s hadn’t been looking for man who’d be “the next Dylan” (anyone remember what that did to poor Steve Forbert?) they would have realized Patti Smith was the next Dylan. She should have all his accolades, a Pulitzer, a Kennedy Center Honor. Does she even have a Grammy? (No.)

So Clive Davis saw the Dylan in her back in 1974, and signed her to Arista Records. All the years he made money on Barry Manilow and Air Supply (this is long before Whitney) Clive knew he had an artist for the ages. The first albums– “Horses” and “Ethiopia”– were artistic landmarks. Then he put her together with Bruce Springsteen for “Because the Night,” and her career soared commercially.

Patti based The Audible show on excerpts from her insanely great bestselling memoir, “Just Kids.” This is the story of her friendship with artist Robert Mapplethorpe and her love affair and marriage with the late Fred “Sonic” Smith (they were each named Smith) of the MC5. Mapplethorpe died of AIDS. Smith died in 1994 of heart failure. He was just 46.

The Smiths had two kids, now grown, Jackson and Jessie, who played with her last night, as well as the gifted Tony Shanahan. (I don’t know where her other longtime collaborator, Lenny Kaye, was last night.)

Patti interspersed her songs with readings from “Just Kids,” reminiscing about those salad days when she and Mapplethorpe had no money and just wanted to be successful and recognized. And then came the songs: “Pissing in a River” from her second album, “Dancing Barefoot,” “Because the Night,” “People Have the Power,” “Peaceable Kingdom,” “Frederick” (still a heartbreaker), and a cover of U2’s newish “Love is All We Have Left” that she should release as a single.

The two hour show (it was supposed to be 90 minutes) was one of those moments no one who was there will ever forget. Smith tells off the cuff stories as if they’re not scripted, and then cutely actually relates memories that pop into her head. As the audience was leaving the theater she stopped everyone to tell an anecdote about the 1974 Golden Earring hit “Radar Love” which was ‘accidentally’ playing over the PA system with such genuine charm that she could turn this show into an off Broadway version of Bruce Springsteen’s show without any trouble.

Audible.com is on a roll. When they offer this Patti Smith show in the near future, download their app ASAP!