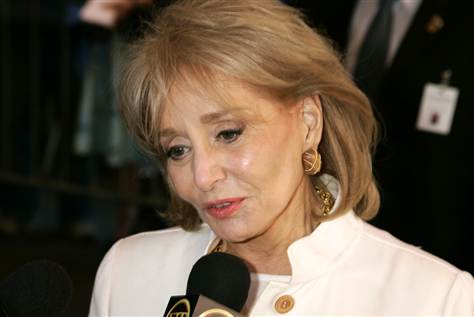 UPDATE: Barbara Walters was totally ambushed by ABC today, my sources say. And the reality is, if she were even contemplating retirement of some kind, either Liz Smith or Cindy Adams would have reported it first. Now every media outlet has picked up this crazy story, and it’s quickly becoming “fact.” Stay turned to see if Walters rebuts. Interesting timing too since “The View” is not live tomorrow, but taped for Good Friday. ABC really played it well.

Earlier: A couple of stories popped up this afternoon in Hollywood columns claiming Barbara Walters was set to announce her retirement. Ha ha. It seems ABC News may have done to Walters what they did to Elisabeth Hasselbeck, and what NBC just did to Jay Leno and Matt Lauer. My source says that Walters had only discussed retiring officially from ABC News, not “The View.” She actually owns a piece of that show.

But ABC may have decided that the only way to make Walters retire was to announce it and see what happened. It’s too convenient that the two stories were published within a half hour of each other. I’m no particular fan of Walters, but this seemed pretty blatant today. I called a close friend of hers who said, “Barbara has been talking to them about retiring from the news side, but not entertainment.” Indeed, the Walters everyone knows would never, ever completely retire from television. It’s her life.

These stories today were also well timed by someone at ABC who knew that Walters’ personal publicist, Cindi Berger, was out of the country, traveling, and on business elsewhere. Berger’s office was surprised by the afternoon ambush. But this is the Machiavellian way networks conduct themselves these days.

PS Any ABC insider “knowledgeable about the situation” insists that Walters was not ambushed, and that this is exactly what she wanted.