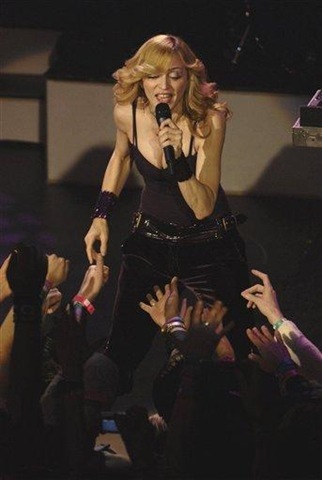 AmFAR: that’s the celebrity studded fundraising group for AIDS research. When Dr. Mathilde Krim started it over 20 years ago. AmFAR was alone and a pioneer in bringing the plight of AIDS and HIV to the world.

Two years ago Madonna made an appearance here in Cannes for AmFar’s annual “Cinema Against AIDS’ dinner. Madonna was in town to promote her self-important Africa documentary. She’d never been to Cinema Against AIDS before. Sharon Stone, as usual, was the emcee and auctioneer. Madonna–who has not donated money to AmFAR at least through her charitable Ray of Light foundation–auctioned off a couple of handbags she owned, a signed guitar, and some miscellaneous items from the stage, even some used tissues.

For her time, and the publicity, this column has now learned that Madonna received an in-kind donation to her then brand new Raising Malawi charity, of $1 million.

Raising Malawi was started in 2007 as an arm of the Kabbalah Center in Los Angeles. The group is busy inculcating Malawian children with Kabbalah curriculum. Says one former Kabbalah Center member: “They’re very good at going into poor countries and getting a foothold.”

Raising Malawi had so much trouble getting a 501 c 3 designation that in early 2008, Gucci had to start its own foundation to accept money for it at a fundraiser. Everything about Raising Malawi is tied to the Kabbalah Center and Kabbalah’s real estate arm in Los Angeles.

Never before Madonna picked up that million dollar check had AmFAR given such a large donation to any organization. In 2008, in fact, the second largest amount given to one entity was a total of about $350,000 to the University of New South Wales in New Zealand. The average amount AmFAR hands out is $10,000 with a few exceptions.

In 2007-2008, AmFAR did wind up giving grants totalling $6.7 million according to the same federal tax filing that lists the million dollar contribution to Raising Malawi. But they also list nearly the same amount of money in salaries, wages and associated fees. Their top staff fo six people makes a total of over $1 million a year. Working for AmFAR isn’t a bad career. The two top execs earn about $300,000 apiece.

By contrast: the Elton John AIDS Foundation also gave grants of about $6.7 million in 2008. They list the expense of staff all-in at  just about $400,000 approximately.

One of AmFAR’s execs, Kevin Frost, emailed me: ” Next to Elizabeth Taylor and Sharon Stone, I am hard pressed to think of a celebrity that has done more to help further our cause.” He added that the event Madonna attended raised $10 million, although that’s still anecdotal. Actual reported figures won’t be available until at least the end of this year. He says the board approved the award.

Frost did not specify any more about how Madonna ranks with Stone and Taylor. It’s not an entirely accurate depiction. Stone has worked tirelessly for AmFAR for over a decade, taking over when Taylor went into retirement.

But in the last couple of years Stone’s role has been severely diminished. This year she told me (in front of witnesses) that she had not been asked to help out in Cannes, and so took a film role. (The AmFAR people have angrily disputed this story.)

There’s no doubt that AmFAR raises money for AIDS reseach and does many good things. But the Madonna pay off is an eye raiser. AmFAR, it could be argued, might have used the money elsewhere or in many different places. Frost says the group works with other Malawi aid organizations. But none have ever received anything close to a million dollars.