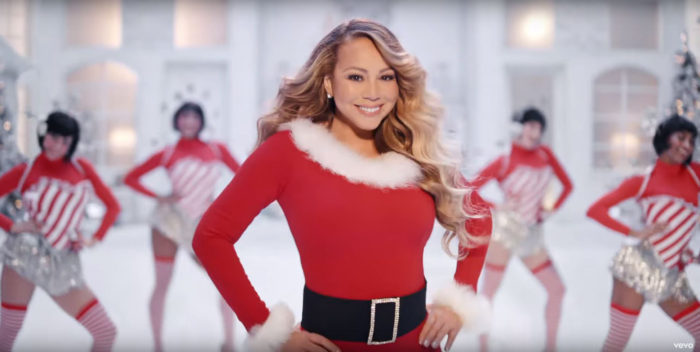 Let’s start there. Walter Afanasieff co-wrote and produced many of Mariah Carey’s key hits back in the early 90s. But now he tells the podcast Hot Takes (click here, on iTunes) that Mariah has changed the history of the song’s origins. He’s fed up that Mariah keeps saying she wrote the song when she was a kid. He knows the truth. He wrote it.

Remember, I’ve told you many times about the countless plagiarism suits and settlements behind Mariah’s hits including “Emotions,” and many others. There was a famous legal dispute over the lyrics to “Hero,” for which Afanasieff wrote the music.

When Carey was inducted into the Songwriters Hall of Fame this year she didn’t even mention the dozens of composers who actually wrote her hits. Afanasieff wasn’t alone in the omission. Ben Margulies, who Afanasieff cites in the podcast, wrote most of her first and second albums. Others included Babyface, Dave Hall, and so on.

Afansieff says that once they finished “All I Want for Christmas,” that was the end of their relationship. Carey started taking the credit for the song. It would be twenty years before he’d hear from her again. And even then, he says on the podcast, she wanted something from him, promised to get in touch, and never contacted him again.

Afanasieff says Carey’s assertion now that she wrote “Christmas” years before they met is simply untrue. He says, “to claim that she wrote a very complicated chord-structured song with her finger on a Casio keyboard when she was a little girl, it’s kind of a tall tale.’

The podcast, from Jess Rothchild, must be listened to by all Mariah Carey fans. It’s enlightening beyond even Mariah. Afanasieff should write a book at this point. Other artists he composed for, like Celine Dion, would take cover! Afanasieff is equally unsparing about today’s pop stars like BTS. “Paul Simon never said Oh that’s that song on the radio, I’m going to write a song like that.’ He just writes whatever he wants.”

Afanasieff also criticizes Beyonce for her latest single. “It has nine songwriters. Nine!” He’s blistering about former “American Idol” star Pia Toscano and how she got screwed out of a career. (Read Toscano’s account in Billboard here.)

Compounding Carey’s problems on “All I Want for Christmas” is a lawsuit filed last year from a songwriter who says he wrote a similar song with the same title at least four years earlier, in 1990. He’s not just blowing smoke. The record was released under the name Vince Vance and the Valiants, sung by a female singer named Lisa Layne. It’s pretty clear Mariah knew the song existed when she sat down to write “Christmas” with Afanasieff.

UPDATE: The lawsuit was settled in November, officially cited as “Dismissed without prejudice.”

Afanasieff says, “Since the 90s we’ve seen the dismantling of the songwriting process.”