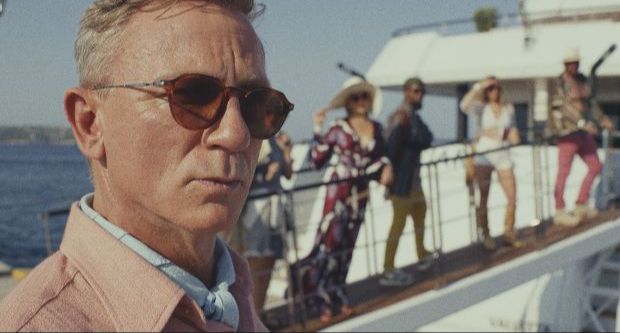 Rian Johnson’s “Glass Onion: A Knives Out Mystery” starts on Netflix this week after a weeklong run in theaters to gin up interest. It made a lot of money in the latter run and sold out its houses. A lot of movie bloggers through Netflix made a mistake not letting it run longer in theaters, but I think the plan is right. “Glass Onion” may have worn out its welcome in a wider release.

The reason is it has no third act. The first act, with Daniel Craig returning as Benoit Blanc, is a bit of genius. Benoit turns up in Greece as the uninvited guest of the Elon Musk-ish Miles Bron played with slithery self-satisfaction by Edward Norton. Miles has invited a bunch of friends and one enemy for a weekend of murder mystery. Someone will “die” — probably him — and the group will have to figure it out.

The group of friends includes Kate Hudson, Kathryn Hahn, Leslie Odom Jr., Jessica Henwick, Madelyn Cline, and Dave Bautista. Unfortunately for Bron, Benoit guesses the whole thing, the weekend plans are shot, or so it seems. (There are a lot of humorous things going on including Johnson’s friend, actor Noah Segan, wandering around the set completely divorced from the plot.)

Act Two is pretty much an extended flashback, one of the weirder screenplay tricks in some time. It’s almost all about Benoit and Janelle Monae as, as, well, you’ll see, the actual story is explained: all the friends met when they had no money. Monae and Norton hit it big in some kind of tech and bankrolled the others in their pursuits. But Monae and Norton have had a falling out, which affects the friends, or “The Shitheads,” as Monae calls them.

As I said, Norton’s Bron has rented a Greek island with a mansion on it. No expense has been spared, in real life or in the movie. Unlike the first “Knives Out,” all modesty is gone, from a reproduction of the Mona Lisa to all kinds of gizmos including laser beams. The set is a character, and a forbidding one at that.

But the second act works, and is the tightest part of this long movie. Craig and Monae seem like they’re in a two-hander by Pinter, and I actually sat forward in my seat both times I watched the film just to see what they were up to.

The third act is where Johnson’s road runs out. Once Benoit solves the murders and explains them in his Southern drawl, you can feel Johnson saying to himself. Now what? Well, he had a big budget this time, so there are explosions and chases and a lot of running around. There’s a lot of shark jumping, and then the Beatles’ song “Glass Onion” wraps it all up.

We do learn in this movie a tiny bit about Benoit Blanc’s personal life where he sleeps, and with whom (it’s a surprise). The screenplay is full of meta bon mots so we know our detective is at least somewhat aware of the world around him. Craig is just sublime and so is Monae. But I do wish the whole Onion, when it was peeled away, revealed something a little more profound. Plus, in the first movie, a family is rocked by the murder of their patriarch. In this one, the murder victims are not terribly sympathetic. Johnson seems more concerned with the plot mechanics than the souls of his characters.

Still, “Glass Onion” is a satisfying entertainment for a cold winter night.