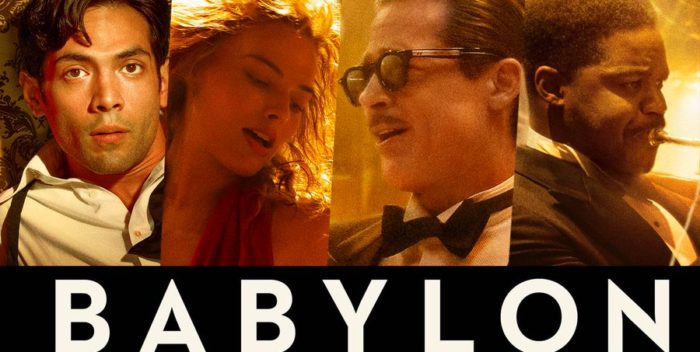 Welcome to “Babylon,” an homage to Kenneth Anger’s infamous book, “Hollywood Babylon,” filled with scurrilous stories — almost all untrue — describing the film capital of the world in the late 1920s as Sodom and Gomorrah.

Director Damien Chazelle, with three really great movies behind him (“Whiplash,” “La La Land,” “First Man”), seems to have taken all this imagined bacchanalia too seriously. So he’s applied his generous sense of art production and cinematography to invent a mostly bogus world that goes way over the top and collapses in a heap of incoherence.

At three hours, “Babylon” has a lot of different plots that don’t come together. Their one common thread is sewn by Margot Robbie as a flapper who is styled, for some reason, a like an 80s disco queen. She looks nothing like the other women of the film, and sounds like Amanda Seyfriend‘s Marion Davies from “Mank.”

Robbie’s Nellie escapes her restrictive home for the lights of Hollywood. She’s determined to be a big star in the silent films. She makes a friend who becomes her manager and lover (Diego Calva as Manny), They are just the beginning of a long list of studio executives, actors, and hangers on, some real, some fictitious, who are at the center of a debauched world that makes “The Great Gatsby” look like a horror movie.

I can’t say even Nellie and Manny are sympathetic characters. The only one who is is Brad Pitt as fading silent actor/director Jack Conrad. Sound familiar? Conrad is similar to Pitt’s Oscar winning character, Cliff Booth, who also sensed his time was up as stunt man and coat carrier to Leonardo DiCaprio’s middling TV star, Rick Dalton, in “Once Upon a Time in Hollywood.” With everything else so completely out of control in this movie, Pitt gets quite zen. He makes himself the magnetic center of the film, and we’re willing to follow him to his tragic fate.

The only other character in “Babylon” who conveys Conrad’s self-knowledge is Jean Smart‘s gossip columnist, Elinor St. John. She’s pre-Louella Parsons and Hedda Hopper, visiting sets, trying to control lives, make or break careers. Smart is having some big moment right now with “Hacks.” Elinor is not so different from Deborah Vance, the world weary comedian. She’s seen it all. And in the dead center of this three hour carnival, Elinor and Jack have the best scene of “Babylon” as if Cliff and Deborah meet in a time warp. I think they deserve Oscar nominations just for that.

The rest of “Babylon.” though is a Mixmaster, a Cusinart, a kaleidoscope. It’s too much money, no restraint, everything but the kitchen sink. Or, and the kitchen sink. It’s Chazelle’s “Heaven’s Gate.” He’ll recover from it, and so will we. But like David O. Russell’s “Amsterdam” — another all star cast and creative bloat — it’s a major disappointment in a year when we needed each of them to be successes so badly. Disappointment is all you get here.