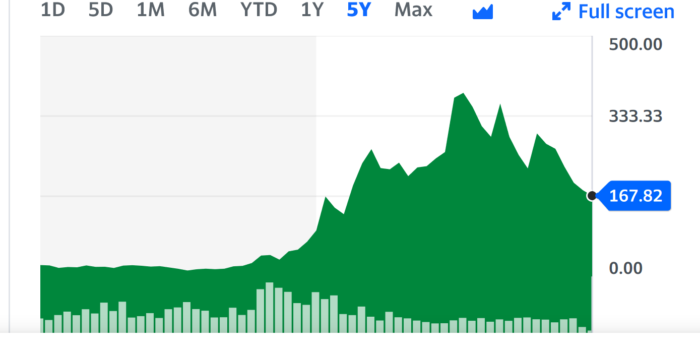 Elon Musk has literally taken the place of Kanye West as a public figure making daily outbursts and odd appearances.

Musk doesn’t seem to care that his company’s stock has dropped to a new year to year low because of it. Tesla closed at $167 today.

Musk, as you’ve heard, was booed at a Dave Chappelle comedy performance in San Francisco after he was introduced. He also proposed on Twitter prosecuting Dr. Anthony Fauci — for what, it’s unclear since Dr. Fauci is a hero in most right thinking people’s minds.

In attacking Dr. Fauci, Musk also upset a big group of people who are adamant about using gender identifying pronouns. His claim on Fauci came in form of a Tweet that read: “My pronouns are Prosecute/Fauci.”

All together no good news for Musk who doesn’t appear to understand the parallels between him and Kanye. This is going to end badly for him, Tesla, and probably Twitter.