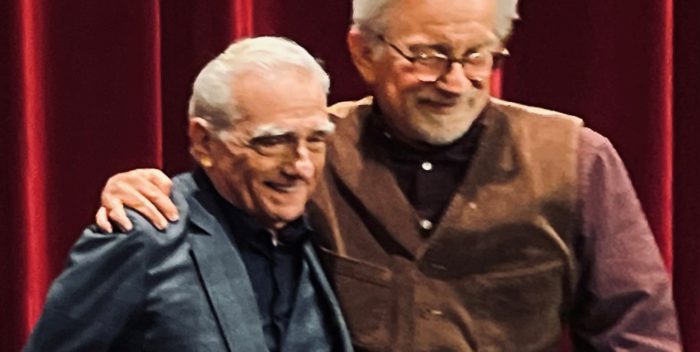 Martin Scorsese interviewed Steven Spielberg about his new film, “The Fabelmans,” a semi-biographical story about his journey to become a director, Sunday afternoon at the DGA Theater on West 57th Street. As the two greatest living directors sat down to talk, this became less an interview than a wide-ranging conversation about family, art, and, of course, directing. For movie lovers it doesn’t get any better than this.

Here are some highlights from their 30-minute conversation:

Scorsese: Do you think now our, your age, but in a sense we tend to maybe wait to the closest, closest to us are gone before we could really tackle the subject matter for yourself?

Spielberg:  When you lose your parents, (his father died last year and his mother 4 1/2 years before) “You realize for the first time, which you never realized before, that you’re an orphan… And it’s something that, as anybody here has already experienced, it goes to the marrow of all of us. It is something that you don’t think about, you don’t anticipate it. And when it happens, it is a real feeling of loss and abandonment. Not just loss, but  abandonment. And yet my mom was very inspirational for me because she had always wanted me to tell the story. She knew all the stories we had the secret my mom and I had for a long time. And my mom would always say to me, ‘Geez Steve, this would make a really terrific movie. Why didn’t you make that a movie someday?’

But I, so I think I needed to wait yes until I felt then feeling of loss and loneliness before I could really get serious about this.”

And she was also madly in love with my dad’s best friend and business partner. And she didn’t know if that would ever happen. So she had a kind of, she sort of vicariously lived through my dream fulfillment, wanting to be a director, when she knew she probably would never be able to be with my father’s best friend and her best friend.”

Spielberg cracked, that over the 50 or so years they’ve known each other: “ Marty has only talked faster as you’ve gotten older.”

“I tried to slow it down. I tried,” lamented Scorsese.

Spielberg: “He’s not slowing down, that’s the point.”

“No, no, no,” laughed Scorsese. “ That’s why there’s sometimes, like stuff in front of a camera, I try and calm down, try to get it across. But it gets (too) exciting. Sometimes I talk so fast, (someone tells me) you already said it, doesn’t matter.”

Although Spielberg’s mother encouraged his art, his father, as in the movie, wanted him to have a back up plan. He couldn’t envision making a living as a director.

Spielberg: “I think the payoff to all this was when my dad came to the premiere of ‘Jaw’s in 1975 in Los Angeles, and he walked out of the screening, he came over to me and he just said couple words I’ll never forget. He said, “Gee, Steve, this is really neat….He wasn’t even talking about the movie. He was talking about-…”

Spielberg: “The whole gig, the gig.”

The highly charged divorce scene in the film and the different styles of the directors:

Spielberg: “When you look at ‘Raging Bull’ and you look at ‘Goodfellas,’ I’m sure sometimes if they get out hand, you want a duck behind a table based on what’s happening in front of the camera.”

Scorsese: “I have…There are a couple of times I didn’t even see what was going on. I just heard through the earphones. No, I’m not kidding.”

Spielberg: “So I can relate to that. It’s happened a couple of times with me. But that divorce scene was the equivalent of that. Yes.”

Why Spielberg decided to tell this story now: “(Up to now) I’ve been very private about my private life.… And I think that in a sense, COVID gave me the chance to really think about it. And I think when I lost my mom, I started really taking the story seriously… And then after dad left us and COVID gave me so much time to think about… And I didn’t know. I go, “If I had to make one more movie, if I had to make one more story, what would that story be?” And that’s why I decided to put this into production.”

The interview ended with Spielberg asking Scorsese: “Did you like David Lynch?” (In his cameo as John Ford)

Scorsese: “ So tell the joke quickly, how did you do it with David? How did you direct that?”

Spielberg: “Tony Kushner’s husband, Mark Harris, when he heard I was about to make a phone call with this actor friend of mine, he said, ‘Have you ever thought of David Lynch to play?’ And a light bulb went off. It was an incredible masterstroke of an idea from Mark Harris.

So I called David immediately, who I know just a little bit, and David was really flattered to be offered, but said, “No.” He wasn’t an actor and he had other projects he wanted to pursue. He didn’t want to play John Ford because John Ford’s such a great man and what if he didn’t come up to those standards? And he just was kind of shy about that. But the one thing that we could relate to, which I think opened the door a little wider, was the fact that through David Lynch’s foundation, my wife and I got very involved in TM as a way of relaxing. And so we had been three years into the whole TM world and David found out on that phone call that I was involved in that. Bob Ross was our tutor.

I could tell he was leaning forward at the bar on the call, but he still said no. And so I went to my go-to person, Laura Dern, his best friend. I said, ‘Laura, help. I need you. I need you now than I’ve ever before, ever before. You’ve got to talk David into doing this.” David’s promised he’ll give me his final answer in two weeks. We’ve made a deal on the phone. ‘David, can I call you in two weeks so you can tell me no and I won’t bother you again?” He said, ‘Yeah, call me in two weeks.

I said, “You’ve got two weeks to talk him into this.” I called him two weeks later and he answers the phone. He says, “Look, I’ve decided that I’m going to do this under one condition.” I said, “What’s that?” “I want to get the costume two weeks ahead of time to live in it for two weeks. I want to break down the costume.” And I said, “You mean you’re going to wear it?” He says, “Every day. I’m going to come every day. The patch, the hat, everything else send to me.” And he showed up that day in a pretty ratty costume. But it was the way John Ford was.

That scene happened to me and that was the first and last time in real life I met John Ford.”

The audience groaned when told time was out.

“But I will be back,” Spielberg said, pointing to Scorsese. “ I will be back here in New York City at the Directors Guild same time next year interviewing this guy for ‘Killers of the Flower Moon.’”