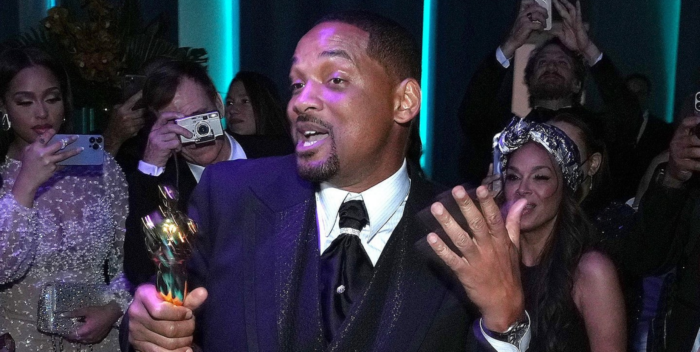 I am sadly laughing out loud.

Who cares if he’s ok with that? I don’t. Smith wants to be rewarded now for the movie, “Emancipation” which by the way has no posted reviews and opens Friday. He wants an Oscar nomination and to be back in the game despite being banned by the Academy for the next decade.

This pathetically hilarious. Apple is trying to recover its $120 million investment and I sympathize with them. After all they didn’t sign on for this mishegos. But Smith’s behavior on the Oscars is unacceptable. It’s not going to be validated now. That would put the Academy in the awkward position of having a nominated film or actor who they’ve banned. What are they going to do? Say “never mind.”

Smith got up out of his seat on national live TV, walked to the stage, and hit someone. From his seat he yelled at Rock. Sorry, nope, I don’t care if he’s made “The Godfather.” That dog won’t hunt, that ship won’t sail. So he says he’s ok with us disapproving of him? What nerve. And his team? They will suffer the consequences. They are Smith’s collateral damage.