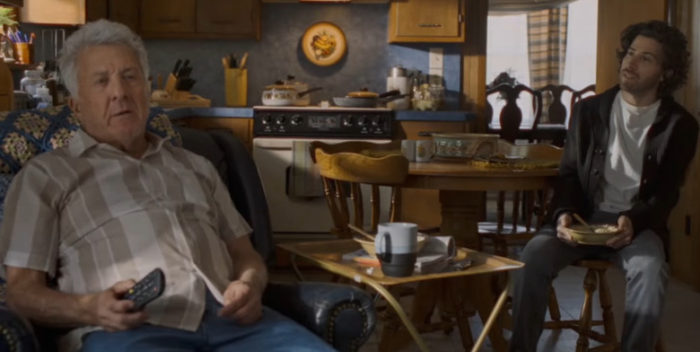 It’s hard to go wrong on your debut film with the likes of Oscar winners Dustin Hoffman and Sissy Spacek. But it takes more than just stars to get things right. Darren LeGallo does just that with his first directing job.

“Sam and Kate” is a charming low key character study. Its PR hook, I suppose, is that Hoffman and Spacek’s respective son and daughter, who are seasoned actors, play their children in the film and are more than just progeny.

The quadrangle takes place in a small town that seems like it might be near Pittsburgh or somewhere toward Ohio. Sam (Jake Hoffman) is living with and caring for his older father, Bill (Dustin). Sam has had a failure to launch, and is basically marking time. Kate (Schuyler Fisk) lives near her mother, Tina, who turns out to be a sweet secret hoarder. Kate has a few mysteries to why she’s back in town, and we’ll find them out down the road.

No one wears a cape, but all four of these people, says LeGallo, who wrote the script, are heroes. They’ve survived to this point overcoming personal obstacles. Now fate brings them together and it’s not as obvious as you might think. The potential couples don’t just pair off and walk into the sunset. Le Gallo burrows down into their souls and comes up with people who we root for and are eminently watchable.

Hoffman, who hasn’t been on screen much lately. is a good match for Spacek. They are oil and water really, which makes Bill and Tina intriguing people to meet each other. They each give master classes in subtlety and restraint. Jake Hoffman is vivid and fun and just shnooky enough to pull this off. (He looks like a cross between 70s Cat Stevens and Al Pacino as Serpico.) Schuyler Fisk is radiant, I’m not sure why she doesn’t do more on film.

“Sam and Kate” won’t make two hundred million dollars. But it’s a great launch for LeGallo, and a lovely vehicle for the actors. If it’s playing in your town, this is the film you take your parents or grandparents to. They’ll thank you.

Plus, value added: always great to see Henry Thomas, who’s very much an adult and a fine actor. He was, of course, Elliot in “ET.”