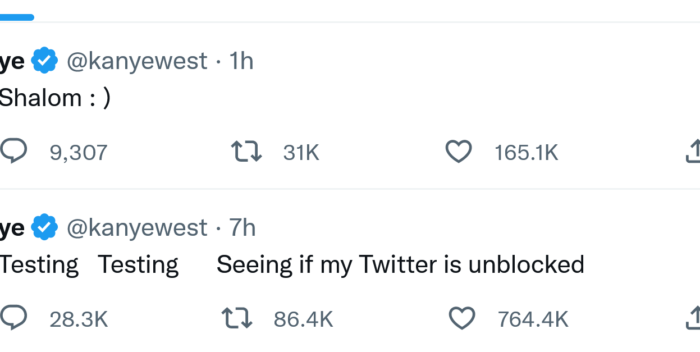 Kanye West hates us. By us, I don’t mean just Jews, but all people.

Allowed to return to Twitter by the discerning Elon Musk, Kanye has one word to say with his first Tweet: Shalom.

West has never apologized for his antisemitic rants that caused most of his business partners to dump him. It started with his comment that he was going to go “death con 3 on the Jewish people.”

The situation devolved from there. He claimed he could say all the antisemitic things he pleased, and Adidas wouldn’t cancel their deal. He was wrong. They did.

Somewhere in his addled mind, Kanye thinks his “Shalom” is a way back. It isn’t. It comes off as mockery. It’s been met that way subsequently on Twitter in responses.

Kanye’s return to Twitter should be interesting. He’s learned nothing.